Ben Saunders, the Ultimate Fighter nicknamed "Berserk," believes he has what it takes to be the last man standing in Spike TV's Ultimate Fighter 6: Team Hughes vs. Team Serra. All he needs is total dedication, his grueling training regimen, and lots of Supreme Protein® bars, his favorite super-anabolic snack. 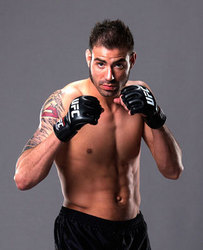 There's no quit in me. You can lay money on that.

With the quarterfinal round of The Ultimate Fighter 6: Team Hughes vs. Team Serra (Wednesdays, Spike TV) fast approaching, Ben Sanders will not be denied. Sixteen fighters answered the bell. Now only five remain. At stake is one trip to the big time in the UFC.

As Ben Saunders prepares to take on Tommy Speer for the fourth and final slot in the quarterfinal round, he knows his odds are still long. But this is a man who suffered a broken jaw in round one of a Combat Fighting Championship against Kenny Stevens and went on to win the three-round decision. Quitting never crossed his mind. Fighters fight on. Only losers quit. They wired up Ben Saunders' jaw after he won the fight and he just kept on training.

Fortunately, Ben's never been in better shape. He trains like a madman every day. He eats consistently throughout the day and micromanages every morsel he consumes. Only the best will do. In fact, when it comes to bridging gaps in his precision-targeted, ultra-anabolic meal regimen, only one snack meets his high standards. The Supreme Protein® bar.

"I literally use my food money in order to buy supplements," Saunders says. "So when I say the Supreme Protein® bar really enhances my training and fight preparation, that really means something. This is my livelihood here. No other bar can compare to Supreme Protein® when it comes to sheer high-quality whey isolate content. The fact that it tastes so great is a real bonus, too. Other bars used to be a chore to eat. But the Supreme Protein® bar is a real treat that helps me build rock-hard muscle and stay lean. I wouldn't eat anything else."

When Saunders isn't fighting, training or taping Spike TV's hit Ultimate Fighter reality series, he's watching and learning from the pros who have gone before him. "I see the UFC guys ahead of me, the kind of dedication they bring to the sport. I watch how they train, how they eat. In fact, I noticed that Frank Edgar (the UFC lightweight title contender who recently improved his record to 8-0-0) is big on the Supreme Protein® bar, too. That doesn't surprise me. I've been telling my friends, family, students, and acquaintances about Supreme Protein® . You want to be the best, you gotta feed the beast. The Supreme Protein® bar is all quality nutrition no fillers."

How does Saunders see the finale of Ultimate Fighter shaping up? Any predictions?

"Oh, I'll be there at the end," the battle-hardened fighter says. "There's no quit in me. You can lay money on that."