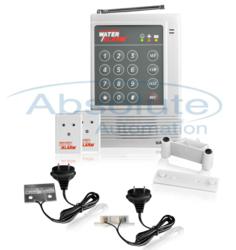 This new Uncle Albert UAD-600 system is perfect. Now there is an inexpensive, easy to install and even expandable water and temperature alarm system for cottage owners.

Renee Laurin, director of marketing for Absolute Automation Inc. stated that she had noticed, “more and more cottage and vacation or seasonal home owners were inquiring about inexpensive alarm dialer systems which monitor for both freezing temperatures and water leaks simultaneously.” Laurin went on to say that, “While the Freeze Alarm Homesitter also monitors for dropping temperatures and water leaks the sensors are hard wired to the alarm dialer unit. Many customers were looking for a solution which enabled them to easily monitor for water leaks in remote areas of their home such as their basement, or even to monitor for water leaks in multiple locations. Often where the alarm dialer unit was being installed was not convenient to any of the areas vulnerable to water damage.”

Amy Campbell from the Absolute Automation sales department agreed, “This new Uncle Albert UAD-600 system is perfect. Now there is an inexpensive, easy to install and even expandable water and temperature alarm system for cottage owners.”

The original Uncle Albert UAD-300 water alarm dialer system has been available for the past several years from Absolute Automation and has been one of their best selling water alarm units. Nathan McBride, president of Bluewater Retreats a local cottage management company in Bayfield, Ontario has found that, “while the UAD-300 has been a reliable water alarm system for cottage owners it was always lacking that ability to also alert our company, and/or cottage owners directly to temperature alarms. With this new UAD-600 system we now have an all in one package to offer cottage owners for temperature and water alarm monitoring, plus because it is all wireless it makes our installation that much easier!”

Absolute Automation has been a distributor of home alarm and automation systems since 1995. Based out of Casco, MI and Bayfield, ON they ship products to consumers across North America as well as Europe, Australia etc.