Teeth and leg bones from Iron Age people are showing a 21st century scientific-research team that there might be an evolutionary silver lining to the gene defects that cause cystic fibrosis (CF). 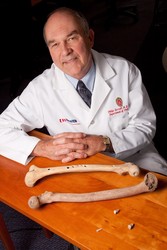 We have to assume that there is some explanation for this mutation being so common. It would never happen if there weren’t some advantage to it occurring.

Teeth and leg bones from Iron Age people are showing a 21st century scientific-research team that there might be an evolutionary silver lining to the gene defects that cause cystic fibrosis (CF).

DNA analysis of ancient archeological finds is revealing that some CF gene defects may protect those who carry them from lead and other metal poisoning, or perhaps tuberculosis.

Dr. Philip Farrell of the University of Wisconsin School of Medicine and Public Health is a CF expert who has studied the disease and treated hundreds of patients with it over 30 years. Thanks to treatments today, CF patients can expect to live relatively healthy, full lives. But left untreated, most would die by age two from serious respiratory and digestive problems.

Farrell’s research interest was piqued, in part, by startling numbers: of the eight million newborn babies who will be screened for CF in the coming year, thousands will have only one mutated CF gene instead of the two needed to cause the disease. One in every 30 people from central or Western Europe has a single copy of the mutation. The same ratio exists in people who migrated from there to the Americas, Australia and New Zealand.

When Farrell first began screening newborns for CF in the 1980s, he noticed that many infants inherited only one defective gene. They were not stricken with CF, but they were carriers who later could pass the mutated gene to their own offspring.

These high numbers must mean something, Farrell reasoned.

“We have to assume that there is some explanation for this mutation being so common,” he says. “It would never happen if there weren’t some advantage to it occurring.”

This theory of “selective advantage” is an extension of Darwin’s theory of natural selection. The theory says that species that are the fittest and most adaptable will survive best while those that are less fit and adaptable will become extinct over time as they are exposed to environmental stresses.

Sickle cell anemia is another example, says Farrell, especially among African populations. People with two copies of the defective sickle cell gene get the debilitating and often fatal disease. But those with one mutation not only are spared the disease--they are protected against the fatal malaria that is so prevalent in Africa.

Since the protective CF gene mutation is so common among people living in or coming originally from central and Western Europe, Farrell suspects that the mutation first arose in that part of the world, very likely in early Celtic populations.

“The Celts were known to make large-scale migrations that would have spread the mutation geographically,” he says. “The mutation could have made these people healthier or more fertile.”

To understand what in the environment could cause the mutated CF gene to occur in the first place, Farrell turned to ancient burial remains. Evidence from his earlier studies already showed that transgenic mice carrying the gene might be resistant to lead toxicity. He wanted to see if there were links to people living in Europe during the Iron and Bronze Ages.

“This was an era in which people were exposed to toxic heavy metals for the first time in history,” he says.

Romans used lead most frequently. Others made weapons, utensils, tools and jewelry from iron. Later, bronze made from copper and arsenic was most popular.

“These goods were highly valued,” Farrell says, “and there was no public health service then to determine any possibly ill effects of exposure to them.”

Farrell connected with museums in Vienna; London; Verona, Italy, and, more recently, Ireland, France and Denmark. Curators eagerly shared molars and femurs—some from as far back as 2,500 years.

He also assembled an international team that includes molecular geneticist Cedric Le Marechal from France. Marechal has analyzed genetic material from the remains, searching for evidence of CF. Scientists at the Wisconsin State Laboratory of Hygiene have been enlisted to look for signs of exposure to metals.

The first analyses are showing that specimens containing CF gene defects were not affected by lead or other metal poisoning, hinting at the mutation’s protective advantage. The specimens also contained very little tuberculosis. The scientists can’t pinpoint exactly where the first CF carrier may have lived, but they think current day Austria is a good candidate.

Reports on the project, some of the first in the new field of evolutionary medicine, have been published in Science of the Total Environment and Nature Proceedings.

Farrell says he hopes to have definitive answers soon. The parents of his CF carrier patients would benefit most from this knowledge.

“I could convince them not to worry,” he says. “I could honestly say, ‘The science shows that your child will not be sick. In fact, he or she may be healthier than other kids.’”