Mr Bollington will formally take up his post on 1st June 2009. 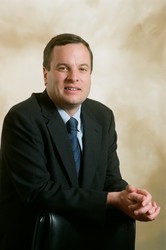 "I am delighted that Andrew Bollington, currently Regional Director for the International Baccalaureate, will be taking on this important role. It carries responsibilities which include leadership of operational service delivery to 45,000 students in 180 countries across the world. His responsibilities will also include finance and staffing issues. I am confident that his experience in developing education at an international level will enormously benefit the External System, which has been operating as a world leader in its field for more than 150 years", said Sir Graeme Davies.

The aims of the University of London External System are clear - to provide access to quality education for all and promote innovation in flexible and distance learning, whilst ensuring student needs continue to remain a priority for the External System in its day to day delivery and future development.

"As Chief Operating Officer, Mr Bollington will work to support the first Dean of the External System, Professor Jonathan Kydd, in ensuring that these aims continue to be met. Andrew Bollington's strong background in IT and experience in the operational aspects of transnational education were features which led us to select him for this key role," added Sir Graeme.

Mr Bollington, currently employed by the International Baccalaureate Organization as its Regional Director for Africa, Europe and the Middle East, will replace Mr John McConnell, who leaves the University after 25 years where he has led the External System through a significant period of growth.

Mr Bollington said: "Education is a transforming experience - and the External System has a remarkable 150 year track-record of transforming the lives of students through high quality education offered around the world. It's a privilege to be joining such a committed and experienced team and to have this opportunity to build on its remarkable strength and ensure that it continues to benefit not only the students, but the countries they come from".

Mr Bollington will formally take up his post on 1st June 2009.

The University of London External System