UOSSM supports the UN's humanitarian chief, Valerie Amos, as she urged the Security Council, “to grant aid agencies cross-border access to Syria without permission from the Syrian government, to avoid a ‘human catastrophe’.” 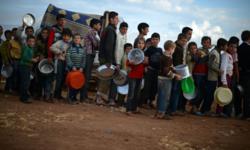 UOSSM supports the UN's humanitarian chief, Valerie Amos, as she urged the Security Council, “to grant aid agencies cross-border access to Syria without permission from the Syrian government, to avoid a ‘human catastrophe’.” According to The Guardian report, in which Amos described the difficulty of reaching areas in needs, “aid convoys to northern areas via Damascus, currently have to cross 50 checkpoints. ‘We need to get aid into these hard to reach areas. It is difficult to do cross-line because of these bureaucratic constraints’”.
http://www.guardian.co.uk/world/middle-east-live/2013/apr/19/syria-crisis-amos-demands-cross-border-access-live

UOSSM views Amos’s proposal to the Security Council as encouraging and presents a reasonable solution to bypass the impediment on the UN aid delivery inside Syria. Amos suggested, ”consider alternative forms of aid delivery including cross border operations. Because too many lives are being lost. This Council must also request the parties to ensure the safe and unimpeded access of aid organizations to those in need in all areas of Syria.”

Dr Tawfik Chamaa, UOSSM spokesperson, said, “We support the UN call for cross the border routes to deliver the aid inside Syria. We urge the UN to consider the Syrian Relief Organizations as partners in reaching areas inaccessible by UN personnel. As Mrs. Amos pointed out, the humanitarian situation is in extremely deteriorated. People are struggling with their daily basic livings, we have to move fast and deliver humanitarian aid in a timely manner.”

UOSSM reiterates the UN statement describing the situation in Syria, “Syrian families have been burned in their homes, people bombed waiting for bread, children tortured, raped and murdered and cities reduced to rubble in Syria's two-year-old war that has sparked a humanitarian catastrophe, the United Nations said on Thursday.” UOSSM stresses the urgency for immediate action to alleviate the plight of Syrian people.
http://www.reuters.com/article/2013/04/19/us-syria-crisis-un-idUSBRE93H0ZI20130419