The statistics reported in the water contamination chart prompted the Bawell Brand Ionizers Earth Day sale, because of their dedicated commitment to providing the highest quality water purification equipment. 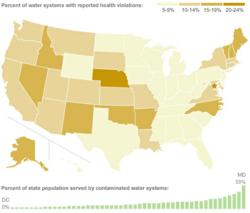 Bawell Brand Ionizers Earth Day Sale will provide people with the ability to purify their own water, which guarantees that they are receiving water that is not contaminated. It has been over 40 years since the first Earth Day was held, and Bawell feels participation is vital. The water system violation statistics can be easily viewed on the interactive chart that the EPA published on MNN.com.

Bawell explained that the EPA and water regulation in the US was prompted by a river fire. The pollutions levels were so high in the Cuyahoga River that it caught on fire 9 times between the Civil War and 1969. This Cuyahoga River fire in 1969 set a chain of events into motion, Bawell reports. First, the EPA was founded by President Richard Nixon just a few months after the 1969 river fire. Then the following April, the first Earth Day was celebrated.

The Bawell representative quoted an EPA speech announcing the EPA's new water plan, "While we've cut the flow of many conventional pollutants into tap water sources, we now face challenges from other pollutants that come from less conventional sources. Not the visible oil slicks and industrial waste of the past, but the invisible pollutants that we've only recently had the science to detect. There are a range of chemicals that have become more prevalent in products, water and our bodies in the last 50 years. Those many thousands of chemicals are the great unfinished business of the 1974 Act."

The Environmental Working Group finally proved that the EPA was right about chromium-6 contaminating water supplies in America, the Bawell representative explains. The Environmental Working Group issued a report that proved there are at least 35 cities in the US with prevalent levels of chromium-6 in the public water supply. The Bawell rep said the "Erin Brockovich" movie released in 2000 brought this issue of the human carcinogen, chromium-6 in the US drinking water supply, to light.

Some of the contaminants found in the drinking water may only cause mild stomach pains, or they may take years to show effects Bawell explains. The rep. said there was an incident in 1993, where there was a cryptosporidium outbreak in Milwaukee, Wis. This water related outbreak killed over 100 people and sickened 400,000 more. The Bawell representative reported that this contamination occurs when natural waterways are heavily contaminated, some of the chemicals or microbes may be able to pass through poorly built, maintained or operated treatment plants. Sometimes water becomes contaminated when a treated reservoir gets directly polluted by stormwater runoff, accidental spills, or illegal dumping.

Bawell Brand Water Ionizers Earth Day Sale celebrates the advancements that have been made in water regulation over the past 4 decades, while being aware there is a long way to go in providing people with water that is not contaminated. Bawell & Co. has been producing their brand of ionizers for the past ten years, visit http://www.BawellWaterIonizers.com to learn more.