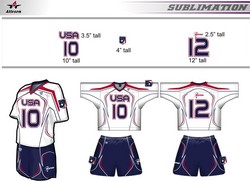 "This agreement establishes a powerful strategic alliance focused on increasing the performance and promotional impact of our men’s national team program,” said Steve Stenersen, president and CEO of US Lacrosse. “We are excited to work with Warrior to best prepare our men’s national teams for competition and broaden their exposure to the national lacrosse community.”

The U.S. men’s national teams program is coordinated by US Lacrosse, the national governing body of the fastest growing sport in the United States. The partnership between US Lacrosse and Warrior will include a variety of efforts to leverage US Lacrosse media properties, such as Lacrosse Magazine, uslacrosse.org, laxmagazine.com and other new social media endeavors, to promote the game both nationally and internationally. Warrior and US Lacrosse will create content for fans, following the team through training and competition.

“I am very excited to regain our sponsorship of the U.S. men’s national teams program and reunite the premier lacrosse team and brand,” said Dave Morrow, founder of Warrior Sports and member of the 1994 and 1998 gold-medal winning U.S men’s national lacrosse teams. “I understand the dedication, commitment and product needed to win. Warrior is thrilled to support the team’s drive for gold and pleased to have the opportunity to introduce the best head-to-toe products in the world, on the best players, on the biggest stage.”

Team USA kicks off its fall exhibition schedule on Sept. 26 at 6:00 p.m. at the United States Military Academy in West Point, N.Y. Then, the team will play exhibition games at the United States Naval Academy in Annapolis, Md. on Oct. 18 and at Stony Brook University (N.Y.) on Oct. 31. The team will also offer instructional youth lacrosse clinics in 10 different locations all over the country this fall. Information on the clinics, a full schedule of exhibition games and ticket purchasing information can be found at uslacrosse.org.

The 2010 U.S. men’s team will compete in the Federation of International Lacrosse (FIL) World Championship in Manchester, England, July 14-24, 2010. Tickets are on sale at 2010worldlacrosse.com. Head Coach Mike Pressler will lead the U.S. team as they seek to recapture the gold after losing to Canada in the 2006 championship game. Since the first recognized international championship in 1967, The U.S. has won eight of 10 gold medals, including its last one in 2002.

Warrior Lacrosse
Headquartered in Warren, Michigan, Warrior is recognized as a premier manufacturer of innovative, high performance, cutting-edge equipment, footwear and apparel for lacrosse athletes of all ages and abilities. Founded in 1993 by former champion lacrosse player David Morrow, Warrior was acquired by privately-held New Balance in February 2004. The company is dedicated to a core set of principles: technical superiority, grassroots marketing, original and creative youthful expression and strong partnerships with retailers and suppliers. For more information, please visit http://www.warriorlacrosse.com.

US Lacrosse
US Lacrosse, a 501(c)(3) nonprofit corporation, is the national governing body for men’s and women’s lacrosse. US Lacrosse has more than 300,000 members in 62 regional chapters around the country. Through responsive and effective leadership, US Lacrosse strives to provide programs and services to inspire participation while protecting the integrity of the game. To learn more about US Lacrosse, please visit http://www.uslacrosse.org.