Report Precedes the Grand Opening of the First Neighborhood in Woodbury East, the Newest of the Villages of Irvine 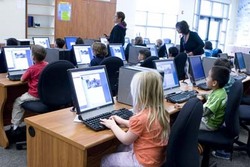 Academic Excellence - Villages of Irvine residents enjoy some of the highest ranked schools in Orange County.

Families are continually attracted to the Villages of Irvine because they know that their children will receive a top quality education from the best academically-ranked schools in the state.

The Irvine Unified School District (IUSD), which serves residents of the Villages of Irvine, is home to the highest number of top performing schools in all of Orange County, according to a new report issued by the California Department of Education.

The state's new 2008 Academic Performance Index (API) ranking, which is based on academic performance and progress on statewide assessments, showed that IUSD was home to seven of the 10 top schools in Orange County. IUSD schools earned scores from 922 to 966 (the highest ranking in the County), out of a possible maximum score of 1,000. In addition, each school in the IUSD exceeded the state's overall API target set at 800. Nearly each school in the District scored a perfect "10" in the overall 2008 statewide ranking while 10 Irvine campuses even scored double "10s" for their academic accomplishments, giving IUSD the strongest presence of the highest-performing schools in Orange County.

"We couldn't be more pleased with this year's rankings -- Irvine schools came out on top once again," said Ian Hanigan, public information officer for the Irvine Unified School District. "Families are continually attracted to the Villages of Irvine because they know that their children will receive a top quality education from the best academically-ranked schools in the state."

This news precedes the grand opening of Ivy, the first neighborhood to open in Woodbury East, the newest of the Villages of Irvine. Ivy by William Lyon Homes will conduct its grand opening in Woodbury East on Saturday, July 11, from 10am to 6pm. Ivy will offer three different two-story floorplans priced from the high $300,000s. The townhomes will range in size from approximately 1,180 to 1,500 square feet.

The new Village of Woodbury East will be served by IUSD's Woodbury Elementary School, Sierra Vista Middle School, and Irvine High School, each earning an exemplary score of 10 in the statewide API rankings.

"Top performing, award-winning schools in superb communities are part of what sets living in the Villages of Irvine apart from anywhere else in the County," added Hanigan. "Seven IUSD schools were recently named California Distinguished Schools, the state's highest level of recognition for public schools. Since 1986, 40 IUSD campuses have been recognized as California Distinguished Schools, with all of the middle and comprehensive high schools being honored at least once."

The Village of Woodbury East is located off the I-5 Freeway, and bordered by Sand Canyon and Trabuco roads in the City of Irvine. Ultimately, this intimate village is planned to offer a wide range of 500 homes in a limited number of neighborhoods, each offering quick and easy access to employment centers, parks, acres of open space, and inviting retail and entertainment centers, including Woodbury Town Center located just across the street.

Homeshoppers interested in Ivy at Woodbury East can receive additional information and sign up on the interest list by visiting http://www.VillagesofIrvine.com/we or by contacting a Villages of Irvine New Home Consultant at (888) 820-0721.

About Irvine Company
Irvine Company is a privately held, 140-year-old real estate planning, development and investment company best known for the master planned community designs of the Villages of Irvine, the balanced, sustainable communities it has planned and created in Orange County, CA.

Ivy by William Lyon HomesWoodbury East, the newest of the Villages of Irvine, will debut it's first neighborhood Ivy this July!

The Palm ClubResidents of Woodbury East will enjoy The Palm Club, the main recreation center within the village.