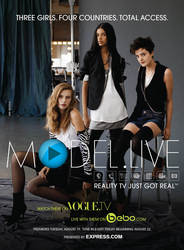 Model.Live, the new web video series airing on Vogue.TV, has been viewed more than one million times since the series launched three weeks ago. The stars of Model.Live--Austria Alcantara, Madeline Kragh and Cato Van Ee--have just arrived in New York City for Mercedes-Benz Fashion Week hoping to find work and viewers are tuning in to follow their ups and downs.

Over 750 fans are signed up for Model.Live on Social Media Network Bebo (http://www.bebo.com/modellive) where each model updates her profile daily with video diaries, text messages, photos, blogs, schedules, e-mails and voice mails. Viewers have commented on each model's progress and posted messages of support, encouragement and advice for a total of 1.25 million interactions with the series since launch.

Model.Live airs first on Vogue.TV every Friday and can be found 24 hours later on Bebo, EXPRESS.com, YouTube and Vogue.TV's syndication partners Hulu, Tivo, Tidal TV, Veoh and Juice Caster. The episodes have also been shared and reviewed by bloggers and posted on various Web sites via an embeddable video player.

Tune in this Friday, September 12 for episode 6 when models walk the runway. So far, the models have already walked in the following fashion shows during Mercedes-Benz Fashion week: Austria has walked in Cate Holstein, DKNY and Ports 1961. Madeline has walked in Chris Benz, Cushnie et Ochs, Shipley & Halmos and Vena Cava. Cato has walked in RVCA, Nicole Miller and Obedient Sons & Daughters. To view episodes 1 through 5 visit http://www.vogue.tv/#Watch/Channel_Guide/8.

About Model.Live
Model.Live is a new broadband video series that documents the lives of three IMG Models on their way to fashion shows around the world. The 12-week, 14-episode show reveals the truth about how professional models live, and the hard work and commitment required to achieve star status. Created by IMG Media and sponsored by EXPRESS.com, the series premiered on Vogue.TV, Tuesday, August 19. The story simultaneously unfolds on global Social Media Network Bebo (http://www.bebo.com/modellive), where viewers can interact with the models and receive instant updates on their activities and experiences throughout the day.

About Vogue.TV
Vogue.TV is a broadband video network produced by the business department of Vogue magazine that delivers marketing through entertainment with original video content that can be simultaneously shopped and shared. A part of the rapidly growing video genre of branded entertainment, Vogue. TV currently features five fashion series: 60 Seconds to Chic transforms an everyday look into instant chic with simple, insider tips; Behind the Lens goes behind the scenes of the season's most iconic ad campaigns and events; Trend Watch presents what's new and what's next in the world of fashion; The Collections showcases the latest runway looks from the world's top fashion designers; and Model.Live follows Cato, Madeline & Austria as they try to achieve their dreams of becoming international superstars. Vogue.TV has attracted over 900,000 unique visitors who have spent over 55,000 hours on the site since launch in August 2007.

About Express
Express is the preferred young, sexy, and sophisticated designer brand for fashion-forward young women and men and all their lifestyle occasions. From casual to dressed-up, Express offers unparalleled style authority. Express operates more than 500 retail outlets in the United States and generates $1.8 billion in sales annually. Visit Express at http://www.EXPRESS.com.

About Bebo:
Bebo is the world's leading global social media network. Building on the notion of traditional social networking websites, Bebo combines community, self-expression and entertainment to enable its users to consume, create, discover and share professional and user-generated content through the Bebo website. Bebo has over 11.5m unique users in the UK and a total membership of more than 45 million worldwide. Bebo's worldwide users spend an average of 30 minutes a day on the site.