Five of the Hottest Wakeboard Boats of 2009 by WakeReviews.com

The 2009 Wakeboarding season is slowly getting underway, and with every new season comes the latest hot stuff: the riders, the gear, or in this case, the boats. 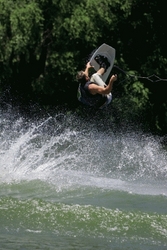 WakeReviews.com - The 2009 Wakeboarding season is slowly getting underway, and with every new season comes the latest hot stuff: the riders, the gear, or in this case, the boats. All the heavy hitters have been "making waves" at all the nationwide boat shows to showcase their latest and greatest boats, wakeboards and wakeboard bindings.

Starting off with Malibu Boats, the 2009 Wakesetter VLX has a new design and is turning more heads than ever with its completely new look. The new Wakesetter presents its owner with prestigious luxury along with bigger, cleaner wakes, and precise handling. Not to mention that setting personal presets for the wake size and shape are only a simple push button away - sounds easy enough to me. It seems that every company's new boats for 2009 have more room and the 2009 Wakesetter sticks with that pattern with all of the additional passenger and storage room it offers. The helm of the boat has most of the same features as its predecessor, except for the addition of a new keyless ignition system and a dedicated driver's remote for the stereo. The seating area is also much deeper than before making it safer for younger passengers. With this new boat, Malibu is starting the season off right, not to mention that one of their own riders, Phillip Soven, took home first place this month at one of their events, the fourth annual Boardshorts, Bulls, and Bikinis competition in Dallas, Texas.

Supra has rolled out their 2009 product line and has added a new model, the Launch 21V. This new model includes a much roomier interior that allows for up to 13 passengers, a lower dash for better visibility, a lower and comfier drivers seat, a new seating design that features larger cushions that turn into lounge seats, Titan Spinner board racks, updated ballast pumps with an automatic shutoff, the new World Package, and the new Gravity Games Package. The 2009 Launch 21V has already won the Trailer Boats 2009 Excellence in Design Award. The aggressive yet elegant design of this boat makes it just as excited to look at as it is to drive or ride behind. Some of the athletes that prefer to ride behind a Launch 21V are the Supra team athletes that consist of some of the top names in the sport such as Josh Sanders, Amber Wing, and Reed Hansen.

Next up on the hot list, Axis Wake Research has brought the world the A22 for 2009. Axis's push to reach the entry-level wakeboard boat market is done by their efforts to tap into the potential buyer's "pride of ownership." The "22" in "Axis22" is for the boat's length. From the design of the hull, to the ballast configuration, to the optional wake enhancement, the A22 is crafted for some big wakes. This boat was specifically designed to make big wakes for wakeboarding, wakesurfing, and wakeskating; it was not designed for any other purpose in mind. Each A22 includes the Wakebox900 Ballast System, or one could opt for the Axis Plug N' Play Ballast System. Just like the Launch21V, the A22 has room for 13 passengers with customizable seats and has plenty of room for storage. It has an oversized driver's seat that has a connecting seat on the backside that allows for someone to enjoy a rear-facing seat. The lucky one in the driver's seat will be commanding the A22's 355 horse of fuel-injected power. One lucky rider that enjoys the fun behind an A22 is professional wakeboarder Randall Harris, who was just added to the Axis Wake Research team for 2009.

Moving right along, the 2009 MasterCraft X-Star is known for not only being the official tow boat of the Pro Wakeboard Tour, the X Games, and the LWC Open, but also for it's wakeboard-specific hull that is designed to disperse water a certain way in order make perfect wakes. The wake this boat produces is a "correct" wake; whereas the wake has a transition that is long and smooth with a little lip at the top, so that one can go in hard without getting bucked off axis. One rider who knows all about the great wakes the X-Star makes is 16-year-old Queen of Wake, Nicola Butler, who was added to the MasterCraft team roster for 2009.

Correct Craft's 2009 Super Air Nautique 230 is the official towboat for the Air Nautique Wake Games, the Masters tournament, and the Air Nautique WWA Wakeboard National Championships. The Super Air Nautique 230 produces a wake with a long transition and a lip that produces a nice "pop". For 2009, the 230 features new progressive graphics, a redesigned helm, and a premium sound system with MP3 input. Some other new features are the underwater lights beneath the platform, the snap-in crest carpet, the deck striping, and a combination pop-up pylon/lift ring. Some of the Team Nautique key players that can be found behind one of these 230's are pros like J.D. Webb, Emily Copeland, Shaun Murray, and Danny Harf.

It seems that all of the heavy hitters in the world of wakeboarding boats have stopped at nothing to make what they each think is the world's best wakeboarding boat for 2009; whether is be more storage room, interchangeable seating, customizable wakes - these boat companies are out to prove they are the best.