Independence Day revelers can now be patriotic and organic at affordable prices! 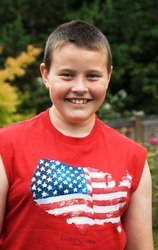 With Walmart’s Independence Day flag apparel, consumers can show they are patriotic and appreciative of the environment at the same time.

Just in time for Independence Day celebrations on July 4th, Seattle-based organic apparel manufacturer Greensource Organic Clothing Co. has worked with Walmart to create a patriotic line of men’s, boys, and toddler organic cotton tees and muscle shirts with a July 4th flag motif. The shirts are available as part of Walmart’s “Faded Glory” brand and are available in red, white, navy, royal blue, heather, and black. The manufacturing process was done in an eco-friendly manner with all the dyes and inks certified to the Global Organic Textile Standards (GOTS).

This is the first time that Walmart has offered this large volume/low price ‘Flag Tee’ item in organic cotton.

“With Walmart’s Independence Day flag apparel, consumers can show they are patriotic and appreciative of the environment at the same time,” said David Basson, Greensource CEO.

Greensource is the world’s 8th largest organic apparel manufacturer, according to a recent report from the non-profit organization Organic Exchange which analyzed organic cotton consumption levels in 2009.

About Greensource:
Greensource Organic Clothing Company, a trend-forward apparel design and manufacturing company based in Seattle, WA, is one of the nation’s largest suppliers of private-label and branded apparel made with organic cotton. It is also a large supplier of certified organic cotton blank T-shirts for the men’s, women’s, and children’s markets.