“Nightmare” from Christian Faith Publishing authors Warren and Cheri Watkins is a powerful account of a family’s battle against the monster in hell that tested their relationship with their Heavenly Father. 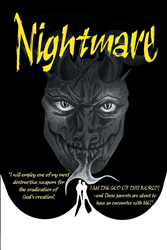 Warren and Cheri Watkins share, “It loomed above her. Saliva dripping from its bloodstained fangs, the creature’s sinister gaze crawled over every inch of her form as it relished the plans for tonight’s actions. What part of her would it go after? Where on this miserable worthless human could it secure maximum impact? Closing its demonic eyes and tilting its disfigured head back, an evil sneer traveled across its countenance.

“Trembling, as visions of brutality coursed through its mind, the depraved demon bent over and whispered to her mind. This time there is no protection from us. You are the animal and we are your cage. Tonight, you will experience hell at our hands. There will be no second chance, no reprieve, no escape. Tonight, missy, it moaned, you belong to me.”

Published by Christian Faith Publishing, Warren and Cheri Watkins’s new book “Nightmare” is a riveting chronicle of a family’s real-life journey through suicide, horrific satanic attacks, and diabolical spiritual warfare. The attack on their family rocked their world and tested the limits of their commitment to their Heavenly Father. Their hope is that “Nightmare” will serve as a warning to all Christians.

The Watkins’ continue, “Based on Biblical accounts, the Watkins believe the following occurred.

“Satan marched brazenly into God’s throne room, demanding permission to attack the family. He accused them of being frauds, phonies and presenting a fake Christian testimony. Insisting his attack would end with the parents cursing God to his face, he exploded, ‘Give me access to them!’ God refused Satan’s full demands, but gave him permission to use their daughter, Andie, in any way he chose.

“Defiantly stalking out of the throne room, Satan silently exulted. ‘I will shred the parents’ relationship with God without harming a single human. I will use their daughter to do that. And I know exactly how I will use her.’

“Andie and her family were ordinary everyday people, living their lives like everyone else. Until it happened. The attack was vicious, depraved, and blood-thirsty.

“While there is no indication in scripture suggesting this type of attack occurs in every believer’s life, should Satan receive permission to attack, you will see and hear nothing of the demons before, during, or after the assault. You will be taken by complete surprise and nothing will prepare you for the scope of Satan’s Godless strategy unleashed in your life, marriage, family and future.

“Pay attention to the instructions in Ephesians chapter six. Without God, you do not want to experience the monster and his nightmare.”

Consumers can purchase “Nightmare” at traditional brick-and-mortar bookstores or online at Amazon.com, Apple iTunes store, or Barnes and Noble.

For additional information or inquiries about “Nightmare,” contact the Christian Faith Publishing media department at 866-554-0919.