WebRidesTV.com releases online video capturing an unprecedented performance match up between the 2009 Nissan GT-R and the 2006 Ford GT. WebRidesTV.com's online video release coincides with Nissan's introduction of the GT-R nameplate into the American automotive market in June 2008. 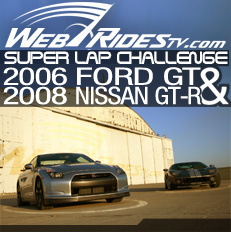 We have three times as many orders for the GT-Rs than the amount we are receiving in the first shipment. The people interested in buying the GT-R are huge car enthusiasts and know the GT-R inside and out.

Arriving at GT-R Certified Nissan dealerships nationwide in June 2008 the Nissan GT-R has the potential of becoming America's most wanted Japanese import. In anticipation of the automobile's heavily hyped arrival, WebRidesTV.com challenges the "unbeatable" Nissan GT-R against America's own supercar, the Ford GT.

Most Nissan GT-R Certified dealers are expected to receive 2 or 3 GT-Rs during the first shipment in June. Flagship Nissan dealer Universal City Nissan located in Los Angeles, California will receive the bulk of GT-Rs hitting American pavement with an initial shipment of 10-11 GT-Rs, which have been available to preorder since 2007.

"There is a lot of excitement surrounding the GT-R because it has never been here before," said an Internet Sales representative at Universal City Nissan. He continued, "We have three times as many orders for the GT-Rs than the amount we are receiving in the first shipment. The people interested in buying the GT-R are huge car enthusiasts and know the GT-R inside and out."

WebRidesTV.com is the first to formally match the Nissan GT-R against the Ford GT on a closed autocross super lap. These two supercars have met before in the virtual world, racing side by side in the popular video game series "Gran Turismo".

The creator of "Gran Turismo" and proclaimed car enthusiast Kazunori Yamauchi debuted the prototype of the Nissan GT-R in "Gran Turismo 4". Yamauchi's company Polyphony Digital also helped develop Nissan's display for the actual 2009 GT-R. Despite his continued interest in the Nissan GT-R, Yamauchi, who owns two Ford GTs, declares that his all time favorite car to drive on the street and race in "Gran Turismo" is the Ford GT.

The Ford GT was born out of racing. Inspired by Ford's classic, LeMans winning, GT40 race cars of the 1960s, the recent GT was designed to revive Ford's heritage and reintroduce Ford as an American racing icon.

If the Ford GT is reminiscent of the Sixties then the GT-R puts us right smack in the middle of the digital revolution.

According to Senior Vice President of Design at Nissan Shiro Nakamura, the GT-R was designed to express modern Japanese culture in a "function over form" fashion. Nakamura has referenced the GT-R's design as inspired by anime robot warriors and racing video games.

Can this virtually derived fantasy deliver in the real world?

Thus far, the Nissan GT-R has a 'take no prisoners' approach to match ups, leaving high performing competitors like the Dodge Viper, the Chevrolet Corvette Z-06 and the Porsche 911 Turbo in the dust.

"The Nissan GT-R has received a ton of love from the media. WebRidesTV.com test drove the car too and were split 50/50. Half of the reviewers wanted to sell the farm and buy the GT-R and the other half thought it lacked the appropriate refinement, especially the transmission. We put the GT-R up against the Ford GT to see if a completely different gene pool, in each case producing similar performance but totally different approaches to the automotive experience, could generate some surprises in the results," says Technical Editor at WebRidesTV.com Larry Harvey.

WebRidesTV.com and professional race car driver Craig Stanton tested the 2009 Nissan GT-R against the 2006 Ford GT on a WebRidesTV.com Super Lap which includes, high speed transitions (slaloms), a decreasing radius turn, a constant radius turn and a straight away. The Nissan GT-R vs. the Ford GT video will be released in June 2008 on WebRidesTV.com.

For car videos about the Nissan GT-R including coverage from the recent LA Auto Show visit WebRidesTV.com.