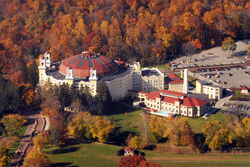 This is incredibly gratifying for us

The awards keep coming for West Baden Springs Hotel! Already recognized by the readers of Condé Nast Traveler as 21st in the Top 75 U.S. Mainland Resorts, the Southern Indiana resort destination has now made the magazine's ultra-exclusive Gold List for 2009. The 15th annual Gold List, published in the January 09 issue, features 710 of the best hotels, resorts and cruise lines from around the world. Over 32,000 readers voted in the Readers' Choice Awards and then the magazine interviewed them to identify what specifically makes them the cream of the crop.

"This is incredibly gratifying for us," said Mark Bommarito, vice president of sales and marketing."We set out with the goal of creating the Midwest's best resort destination and the readers of Condé Nast Traveler have affirmed this with their wonderful reviews."

With an average score of 90.2, West Baden received ratings of 95.5 in the categories of rooms, service, food and design, outranking well-known resorts such as the Wynn Las Vegas, The Greenbrier and the American Club, Kohler.

Originally built in 1902, West Baden Springs Hotel re-opened in May 2007, following a meticulous restoration. Nearly 100 million dollars was spent in a top to bottom restoration which maintained the historic integrity of the building but upgraded its amenities to that of a four-star property.

West Baden is a part of the French Lick Resort , which as a whole has undergone a 500 million dollar restoration and development project. In what has been called one of the largest private restoration projects in the U.S., the owners saved two turn-of-the-century grand hotels and brought resort life back to Indiana. No small feat, their work has been recognized by the National Trust for Historic Preservation.

For more information or to book a stay, please visit http://www.frenchlick.com or call our reservation specialists at (888) 936-9360.