Westminster College was named to the 2013 President’s Higher Education Community Service Honor Roll With Distinction by the Corporation for National and Community Service (CNCS). Participating in community service projects and learning to make a difference in the world are a major emphasis in the Westminster student experience of preparing to be a global leader. 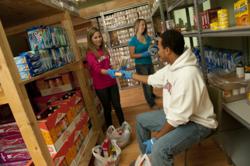 At Westminster College, 84 percent of students participate in community service.

Our mission is to prepare our students to be the kind of leaders that make a difference wherever they find themselves and so commitment to community service is a major emphasis in our educational process.

This is the highest federal recognition a college or university can receive for its commitment to volunteering, service-learning, civic engagement and community service. Only 113 American colleges and universities received this level of recognition. Westminster is the only school in Missouri to be named to the 2013 list.

Members of the awards committee were particularly impressed with Westminster’s poverty and hunger initiatives, international service and service days and trips.

“We congratulate the awardees and the students for their dedication to service,” says Wendy Spencer, CEO of CNCS. “These institutions have inspired students and faculty alike to roll up their sleeves and work alongside members of the community to solve problems and improve neighbors’ lives.”

Westminster has been cited on the honor roll every year since the recognition was established in 2006.

“Our mission here is to prepare our students to be the kind of leaders that make a difference wherever they find themselves and so commitment to community service is a major emphasis in our educational process,” says Hannah Minchow-Proffitt, Westminster Fellow for Community Engagement & Service-Learning at the Emerson Center for Leadership & Service on the Westminster campus.

CNCS is a federal agency that engages more than five million Americans in service through its Senior Corps, AmeriCorps and Learn and Serve America programs and leads President Obama’s national call to service initiative, United We Serve.

The agency oversees the President’s Higher Education Community Service Honor Roll in collaboration with the U.S. Departments of Education and Housing and Urban Development, Campus Compact and the American Council on Education.

The President’s Higher Education Community Service Honor Roll annually highlights the role colleges and universities play in solving community problems and placing more students on a lifelong path of civic engagement by recognizing institutions that achieve meaningful outcomes in the communities they serve.

More information on eligibility and the full list of Honor Roll awardees can be found at http://www.nationalservice.gov/about/initiatives/honorroll.asp.

Founded in 1851, Westminster College is one of the top liberal arts colleges in America, according to all major educational ranking firms including U.S.News & World Report, Forbes magazine, The Princeton Review and Washington Monthly. This selective college for men and women operates on two campuses, one an 86-acre residential campus in Fulton, MO, and a second Southwestern urban campus in the vibrant downtown of Mesa, AZ. Westminster is a challenging academic environment where students are educated to lead and inspired to achieve.