“The Umbrella Option” is a rollercoaster ride into a world teetering on the brink of international cataclysm. 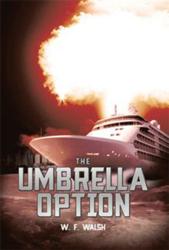 W. F. Walsh marks his debut in the world of suspense fiction and action thrillers with The Umbrella Option. This adrenaline-charged novel will send readers alongside lead character Special Agent Jake Stein on a rollercoaster ride into a world teetering on the brink of international cataclysm.

Special Agent Jake Stein is the head of the Miami field office, Homeland Security Investigations, and a fast-burner within the ranks of Immigration and Customs Enforcement. The Brooklyn native has a history of solving cases that involve illicit drug smuggling and human trafficking. When he starts to hear “noise” about possible terrorist movements in his area of responsibility, he has no idea who and what he is up against.

Stein finds himself pitted against a terrorist group who plans to smuggle a nuclear device onto a cruise ship, sail it to Miami and take out most of South Florida. Now he must join forces with the feds, the mob and even a washed-up television actor to stop what could be the next 9/11 catastrophe.

Packed with action, page-turning suspense and political intrigue, The Umbrella Option is an intense, brilliantly orchestrated work of fiction that will grab hold and keep readers at the edge of their seats until the very end.

About the Author
W.F. Walsh is a two-time Emmy Award-winning television personality and has spent over twenty years in television news and entertainment. As a producer, Walsh has been awarded five Telly Awards for his work on various programs, from news to reality. He is also a lieutenant colonel in the United States Air Force Reserve and has served on military missions to both Iraq and Afghanistan, among many other locations around the world. He has been awarded the Meritorious Service Medal, the Air Force Commendation Medal, the Navy and Marine Corps Achievement Medal, the Air Force Achievement Medal and the Global War on Terror Medal, among others.

Walsh holds a master’s degree for military operational art and science from the United States Air Force Air University and a Bachelor of Science degree from Emerson College in Boston, Massachusetts. Originally from Rhode Island, Walsh now makes his home near Charleston, South Carolina, with his wife, Janet, and their two children, Frank and Amy.