Fathom’s case study was awarded a gold ribbon in the “Form Element Tests” category of the WhichTestWon 2013 Online Testing Awards. 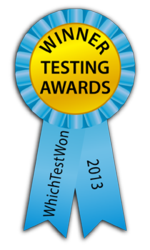 As I have devoted my recent years to conversion optimization, winning the gold ribbon is not only a personal honor, but also validates our team’s focus and effort.

The 2013 Online Testing Awards from WhichTestWon saw 32 winners across 13 categories from among nearly 200 entries. Fathom’s case study of a form element test on behalf of Gemm Learning brought home a gold ribbon.

The Fathom treatment consisted of a redesign of a landing page for lead-generation, paying particular attention to the form element. The result was a winning version that increased completed form submissions by 36.92% at a 99.9% confidence rate.

Awards judge Dan Slagen, Head of Global Marketing Relations at Hubspot, said of Fathom’s winning test, “The obvious changes are around general aesthetics as the landing page transformed from mundane to captivating.”

“While the variation had a more appealing design, the content likely had the biggest impact on the conversion rate lift. The page used a handful of proven persuasive triggers with authority being the strongest,” said Mike Perla, Director of Conversion Optimization & Creative. “As I have devoted my recent years to conversion optimization, winning the gold ribbon is not only a personal honor, but also validates our team’s focus and effort.”

The goal of WhichTestWon’s 2013 Testing Awards was “to encourage as many marketers as possible to enter their tests in order to inspire others … in the marketing, analytics and Web design community.” The contest received about 200 entries in January 2013, and judging was held in February. Judging criteria covered a range of factors, including technical-tactical basics, quality of measurement, results data (including counter-intuitiveness), and applicability.

About Fathom
We believe that all investments in marketing and advertising should be held highly accountable. Fathom is a full-service digital marketing and analytics agency that delivers profitable revenue for its clients across multiple digital touch points. Our results-oriented approach aligns well with mid-cap and large enterprises alike. Our proven track record of success across multiple industries—including manufacturing, technology, education, healthcare and sports—allows us to back up our promise to deliver “results that matter.” Companies that want simple answers to the digital world’s complex marketing questions choose Fathom for the assurance that the return on their advertising budgets will be highly profitable.