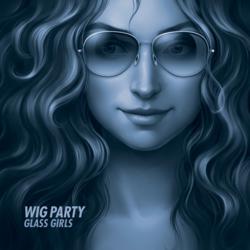 I was honored to be able to record with Wig Party. The album shows Wig Party’s range of musical style and displays the guys’ musical talents and songwriting ability. - Tom Marshall (Phish, Amfibian)

"Glass Girls" brings a lighthearted energy that calls the listener to dance, party, and have a good time. “We want to make music that you can't help but move your body to, but we also want people to hear our lyrics and get lost in the tale being told,” says Vincent. The six songs on "Glass Girls" represent a small piece of Wig Party's catalog, but is an accurate reflection of their eclectic sound. Accessible to music fans of any genre, "Glass Girls" showcases the many styles and influences driving Wig Party.

Wig Party continued perfecting their live craft in 2012 with a heavy rotation of new tour dates. Their performances have been described as upbeat, energetic and fun, with well-crafted original songwriting on display at each show. Moving forward into 2013, Wig Party is on a steady track to grow from regional group to national touring act.

You can learn more about Wig Party at http://www.wigpartymusic.com.