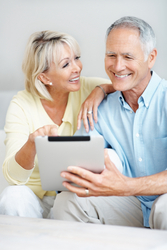 These devices enable users to get online, through a high-speed internet connection, within seconds of turning them on.

This year will see the release of several mobile devices that will make browsing the Internet and using applications more accessible than ever. WildBlueDeals.com, an authorized dealer for WildBlue Communications – a leader in high-speed satellite Internet, has released a list of four devices perfect for those who want to browse the Internet without the hassle of setting up a desktop computer. These devices, which are all due out in the coming months, can get anyone online in minutes.

iPad: Apple didn’t invent tablets, but they definitely helped make them popular with the iPad. The interface utilizes a slick icon-centered design that’s easy to navigate. The iPad has access to Apple’s App Store, which has more than 300,000 apps. Users can hop online through a Wi-Fi connection, or for an additional cost, connect anywhere with a 3G data plan. The next iteration of the iPad is expected to launch in late spring.

Motorola Xoom: Already hailed as the first great alternative to the iPad, the Motoral Xoom will be out in the first quarter of 2011. The Xoom is similar to the iPad in size and function, but with a few key differences: it runs on Honeycomb, the newest version of Google’s Android operating system made specifically for tablets, it’s got front and rear facing cameras, and it’s able to connect to the Internet through Verizon’s fast 4G LTE network.

Dell Inspiron Duo: The Duo offers the best of the tablet and laptop worlds. Housed in a thin case, the Duo can be used as a tablet, or a laptop with a full keyboard, just by swiveling it back and forth. The Duo runs on Windows 7, with added custom tablet software by Dell, which makes it an easy mobile computing transition to those familiar with Windows systems.

Blackberry Playbook: The Blackberry Playbook packs a lot of power into its seven-inch frame. Due out in the first part of 2011, the Playbook uses a custom operating system that utilizes simple swipes to display information and navigate applications. Early base models of the Playbook will connect to the Internet through a Wi-Fi connection. A WiMAX enabled version is expected to be released later in the year.

Gone are the days of lengthy installs and setups. These devices enable users to get online, through a high-speed internet connection, within seconds of turning them on. For more information on secure, high-speed satellite Internet visit WildBlueDeals.com, an authorized dealer for WildBlue Communications, at http://www.wildbluedeals.com.