Author tells all from his difficult childhood to fighting in WWII to immigrating to Canada. 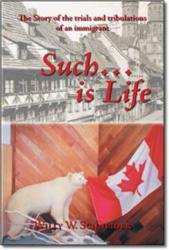 In his new memoir, “Such... is Life: The Story of the Trials and Tribulations of an Immigrant” (published by Trafford Publishing), Willy Schneider tells his personal story living a life of, as he calls them, derailments.

Growing up, Schneider’s younger years were full of confusion caused by the divorce of his parents and apprehension due to his tyrannical grandmother. After working on a large farm, he was drafted into the German Army and after boot camp, he was promptly deployed to Russia where he experienced overwhelming hardship, brutality, death and misery. Even though he was wounded several times, he survived only to find his hometown occupied by Russian troops. It was this reason that Schneider decided to flee Germany, finding a new home in Canada.
The initial years in his new homeland were a cultural shock and full of surprises: some quite funny, others not. After nearly five years in jobs he would have never imagined doing, he finally found his niche in the financial service business. Now retired and enjoying his golden years, Schneider shares that he has never regretted his decision to emigrate.
Even though his life was a roller-coaster, Schneider never lost his sense of humor describing the ups and many more downs during this walk through life.
“Such... is Life”
By Willy Schneider
Softcover | 6 x 8 in | 298 pages | ISBN 9781412083430
Available at Amazon and Barnes & Noble

About the Author
Willy Schneider was born and raised in Germany. After completing high school, he chose to work in agriculture and was trained to be an agricultural estate manager. Immediately after the completion of his three-year training he was drafted into the army and was shipped to the Russian front, where he spent over two years in the vicinity of Leningrad. After the war he immigrated to Canada. After nearly five years working in the forest industry, various types of construction and sometimes simply as a handyman, he was eventually introduced to the financial service industry. He joined Sun Life of Canada in January 1959 and retired in 1999. During those years he and his wife have always lived in Terrace, B.C.