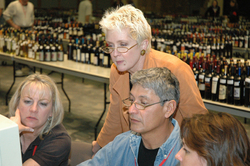 Behind the Scenes at DMNWC

Our association with TexSom brings unprecedented opportunities for medal-winning wines on multiple levels. The reach of this extensive network of wine professionals broadens the impact on sales far beyond the greater Dallas market.

Known for medals that open doors to wine sales throughout Texas, as well as its slate of highly-credentialed judges, The Dallas Morning News Wine Competition has added a significant new dimension to benefit award-winning wineries by aligning with TexSom.

The TexSom organization produces the country's only Sommelier conference with upwards of 300 wine professionals gathering every August to form a network of influential wine buyers across the United States.

Rebecca Murphy, The Dallas Morning News Wine Competition's Founder and Chairman says: "Our association with the TexSom organization brings unprecedented opportunities for medal-winning wines on multiple levels. The reach of this extensive network of wine professionals broadens the impact on sales far beyond the greater Dallas market. It's invaluable exposure for a wine."

"As wine professionals, sommeliers seek out new brands and vintages that might otherwise never cross their paths," says TexSom co-founder James Tidwell MS of the Four Seasons Resort and Club Dallas at Las Colinas. "Access to such an enormous array of wines from every variety and so many countries presents an exciting opportunity for discovery. This will be one of the highlights of our conference."

"Over the years, we've earned a reputation as one of the most respected wine competitions in the country," said Murphy. "No winery enters a competition today without expecting the positive impact a medal should have on sales. As we continue to enhance our format to introduce even greater exposure for winning wines to both the trade and consumers, we believe we have found the perfect sales conduit through this alliance with TexSom and the conference they produce."

The competition's call for entries is issued in November with a January 21, 2011 deadline for submissions. Judging will be held at the Four Seasons Resort and Club Dallas at Las Colinas on February 20-21, 2011 and gold-medal winners announced in Salut! published by The Dallas Morning News on March 24.

About TexSom: Founded in 2005 by Master Sommeliers James Tidwell of the Four Seasons Resort and Club Dallas at Las Colinas restaurant group and Drew Hendricks of the acclaimed Pappas Brothers, both of whom have been active in the organization and execution of the DMNWC. In addition to providing educational programs and a peer network, TexSom also hosts the nation's only conference dedicated to wine professionals.