R. Albert Mohler, Jr., has been appointed to the Francis Schaeffer Chair of Cultural Apologetics at the World Journalism Institute at The King’s College in New York City. He will teach at the annual convergence journalism course in May/June 2010. 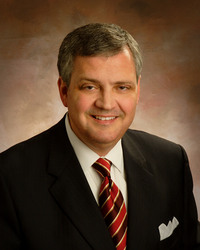 "Al Mohler is among the handful of Christian intellectuals in America who speaks not only to the academic but also to the average Joe. It is a great honor to have him instruct our journalism students," said Institute Director Robert Case.

R. Albert Mohler, Jr., has been appointed to the Francis Schaeffer Chair of Cultural Apologetics at the World Journalism Institute at The King's College in New York City.

Dr. Mohler is president of The Southern Baptist Theological Seminary in Louisville, Ky., and hosts The Albert Mohler Program, a daily nationwide radio show devoted to engaging contemporary culture with his Bible-based beliefs. He also writes a popular blog.

Mohler received a B.A. from Samford University. He holds a Master of Divinity degree and the Doctor of Philosophy from Southern Seminary. He has pursued additional study at Oxford University (England).

Christianity Today recognized Mohler as a leader among American evangelicals and Time called him the “reigning intellectual of the evangelical movement in the U.S.”

Mohler has contributed to several books including Here We Stand: A Call From Confessing Evangelicals and The Coming Evangelical Crisis. He served as General Editor of The Gods of the Age or the God of the Ages: Essays by Carl F. H. Henry. Dr. Henry was the first closing dinner speaker for WJI in l999.

The World Journalism Institute’s mission is to recruit, equip, place and encourage Christian journalists in the mainstream newsrooms of first America and then the world. To that end, WJI offers courses, conferences, internship funding, and monographs on the intersection of Christianity and journalism. For more information or to apply for the course, go to http://www.worldji.com.