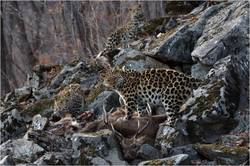 During this holiday season, the presence of these three leopards is something we can all be thankful for. If we can protect them from poachers and loss of their habitat and recover their prey populations, Amur leopards may yet survive.

Three Amur leopards photographed during an anti-poaching operation in the Russian Far East offer a little Thanksgiving hope for the worldÂs rarest big cat, World Wildlife Fund said today. Only about 40 critically endangered Amur leopards exist in the wild, so the photograph of three healthy individuals around a kill is good news for the future of the sub-species.

As soon as the cats -- a female and two cubs -- were identified, an anti-poaching interagency group tightened security by blocking roads around the location. This quick response was even more critical because of the fresh snowfall on the ground, which makes it easier for poachers to track these rare cats. While at least one Amur leopard cub in a litter usually dies, both of these cubs survived their first six months.

ÂDuring this holiday season, the presence of these three leopards is something we can all be thankful for," said Dr. Darron Collins , Director of WWF-USÂs Amur-Heilong Program. ÂIf we can protect them from poachers and loss of their habitat and recover their prey populations, Amur leopards may yet survive for future generations.Â

The anti-poaching interagency group was formed in January of this year to better protect the regionÂs Amur leopards and prevent their extinction. It includes WWF, Russian government agencies and other conservation organizations. To date, the group has conducted 67 operations; instituted four criminal cases; confiscated 12 guns and rifles, filed 18 protocols for administrative infringements; and inspected 33 vehicles.

WWF is the worldÂs leading conservation organization, working in 100 countries for nearly half a century. With the support of almost 5 million members worldwide, WWF is dedicated to delivering science-based solutions to preserve the diversity and abundance of life on Earth, halt the degradation of the environment and combat climate change. Visit http://www.worldwildlife.org to learn more.