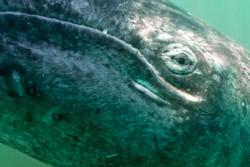 Just around 30 female western gray whales of breeding age remain – the population is already on the brink of disappearing forever. The loss of even a few breeding females could mean the end for the population.

Only around 130 whales of the critically endangered Western population exist today, and their primary feeding habitat – off Sakhalin Island – is already besieged by multiple oil and gas exploration and development projects.

The construction and operation of an additional offshore platform could have numerous negative impacts on the whales, potentially disrupting feeding behaviors and increasing the chance of fatal ship strikes. Also, a third platform heightens the risk of an environmentally catastrophic oil spill in this sensitive habitat.

“Just around 30 female western gray whales of breeding age remain – the population is already on the brink of disappearing forever,” said Aleksey Knizhnikov, Oil & Gas Environmental Policy Officer for World Wildlife Fund-Russia (WWF-Russia). “The loss of even a few breeding females could mean the end for the population.”

Gray whales live on both sides of the Pacific Ocean. However IUCN classes the critically endangered Western population as separate from the Eastern population, as genetic studies indicate that the two populations probably do not mix.

The Western population of North Pacific gray whales depends on the waters off Sakhalin Island for their survival. During feeding season the whales must consume enough for the rest of the year, when they migrate great distances to their breeding grounds. Their primary feeding area, near the proposed platform, is doubly important as the shallow waters are one of the only places where mother whales can teach their calves to feed on the sea bed.

Sakhalin Energy already has two platforms in the area, and said previously that drilling technology advances eliminated the need for a third. The company acknowledges that having two rather than three platforms “significantly reduces the potential for environmental impact,” according to an official Sakhalin Energy document. Moreover, Sakhalin Energy studies from ten years ago show that the area being proposed for the third platform is unsuitable due to unstable clay at the seabed in the earthquake-prone area.

“We are astonished by the announcement from Sakhalin Energy that it intends to build a third platform,” said Wendy Elliott, Species Program Manager, WWF-International. “The company’s own detailed assessments concluded previously that two platforms would be preferable, both for environmental reasons and for the efficiency of the operation.”

The company plans to conduct a seismic survey in the summer of 2011 to determine where to begin platform construction. The surveys are used to detect oil deposits under the ocean bed and involve shooting loud pulses of noise into the ocean floor.

Three seismic surveys were conducted around whale feeding habitat last summer causing severe pressure on the animals. Noise from the surveys can be devastating for species such as gray whales that rely on sound to navigate, communicate and find their food.

“We still do not know how badly the whales were affected by major seismic activity last summer – and will not know until the whales return to their feeding grounds again this year and scientists can determine if any are malnourished. It is totally inappropriate for Sakhalin Energy to plan another seismic survey in 2011 before we have the opportunity to examine the health of the animals,” said Doug Norlen, Policy Director at Pacific Environment.

Assessments of the impact of Sakhalin Energy’s operations on Western gray whales are routinely made by a panel of independent experts – the Western Gray Whale Advisory Panel (WGWAP). However the panel’s assessment and subsequent advice has been based on the operation of two, not three platforms. The proposal for a third platform calls into question whether all previous recommendations from WGWAP and regulatory approvals from the Russian government need to be re-evaluated.

“IFAW has been involved in and supported regular annual monitoring of the WGW at their feeding grounds at Sakhalin Island since 2000,” said Masha Vorontsova, Director of IFAW Russia. “We are deeply concerned by the plans of Sakhalin Energy to install the third platform in this area, which is a critical habitat for the survival of the Western gray whale. IFAW will continue its regular monitoring of the Western gray whale feeding grounds, and activities of the oil companies at the area through summer 2011 to ensure that there are no violations of the existing regulations, which would negatively impact the Western gray whale.”