WWF and TRAFFIC: Marine Species Get a Raw Deal at CITES Wildlife Convention 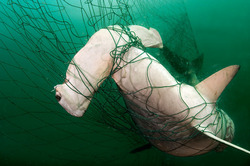 It is shameful that science lost out to politics on marine species at CITES.

World Wildlife Fund and TRAFFIC called on nations to focus on science instead of politics as marine species emerged the big losers from a United Nations conference on endangered species trade that ended today. Proposals to better protect marine species such as the Atlantic bluefin tuna, corals and several shark species were repeatedly rejected at the Convention on International Trade in Endangered Species of Wild Fauna and Flora (CITES), which meets once every three years.

“It is shameful that science lost out to politics on marine species at CITES,” said Mark Stevens, senior program officer for Fisheries at WWF-US. “CITES governments have to set aside political considerations and follow scientific evidence. If they don’t, the implications for conservation, sustainable use of marine species and coastal livelihoods are worrisome.”

Despite the failure of high-profile marine species including corals, sharks, and in particular the critically endangered Atlantic bluefin tuna, governments did make progress toward implementing better protection for rhinos, tigers and Humphead Wrasse.

Of the marine species, Porbeagle shark was the only proposal initially accepted, but it was overturned today, during the final day of the meeting.

Stevens said the Doha meeting may someday be seen as a turning point for the recovery of Atlantic bluefin tuna populations.

“We hope to turn the disappointing results of this CITES meeting into an opportunity,” Stevens said. “We’re seeing a new pro-conservation attitude in the run-up to the next meeting of the International Commission for the Conservation of Atlantic Tunas (ICCAT) in November in Paris. Fishing nations started to talk-the-talk at CITES, the ball is now in their court and regional fisheries management organizations like ICCAT must now muster the political courage for what they have been too timid to do for years – put in place scientifically sound recovery plans for this spectacular predator.”

Stevens added that this must include a temporary suspension of fishing for Atlantic bluefin tuna to give the species a chance to recover and provide the political courage to follow the science.

“The United States must lead the charge, as it did in Doha, by making conservation a priority at ICCAT and resist the temptation to focus on fights over quota allocation,” Stevens said. He added that he was encouraged by a statement ICCAT chair Dr Fabio Hazin made at the end of the CITES meeting that said, “Setting management measures not in line with scientific advice is no longer an option. (...) The commitment to recover bluefin tuna stocks in the Atlantic must be strengthened at ICCAT’s forthcoming meeting in Paris in November.” Japan also intervened at the end of the CITES meeting, committing to lead a global effort to ensure the recovery of Atlantic bluefin tuna.

In other issues, red and pink corals – species that are heavily exploited for the jewelry trade, but greatly overharvested in many parts of their range failed to gain greater protections for the second CITES meeting in a row.

Separately, requests by two countries – Tanzania and Zambia – to relax trade restrictions on their elephant populations and allow a one-time sell-off of government-owned ivory stockpiles were both voted down at the meeting.

“African nations now seem further away from a consensus on how to deal with the ivory issue than at any time since 1989,” said Steven Broad, Executive Director TRAFFIC, the wildlife trade monitoring network of WWF and the International Union for the Conservation of Nature.

There were a couple of bright spots this year related to tigers and rhinos, which are facing a global poaching crisis. Tiger range countries, including China, reached a strong consensus in Qatar on how to address pressing concerns of illegal trade that threaten wild populations of tiger and other Asian big cat species.

CITES governments maintained their position against farming of tigers for trade in parts and derivatives.

In addition, countries with rhino populations agreed to focus on increasing law enforcement and training of guards, strengthening border controls, improving rhino population monitoring, creating awareness raising campaigns in consumer countries such as Vietnam, and rooting out organized crime syndicates that are behind the increase in poaching and illegal trade.

CITES governments agreed to increase financial resources for tackling enforcement. Also, the recently-formed International Consortium on Combating Wildlife Crime (ICCWC) committed to engage on a number of joint activities to bring wildlife criminals to justice. ICCWC is made up of the CITES Secretariat, INTERPOL, the United Nations Office on Drugs and Crime, the World Bank and the World Customs Organization,

“CITES trade rules can only deliver conservation and economic benefits if they are enforced properly and all too often this is simply not the case” Broad said. “The new commitments to CITES compliance and wildlife trade law enforcement announced at this conference are crucial steps in the right direction.”

ABOUT TRAFFIC
TRAFFIC, the wildlife trade monitoring network, works to ensure that trade in wild plants and animals is not a threat to the conservation of nature. TRAFFIC is a joint program of IUCN and WWF. Visit http://www.traffic.org to learn more.