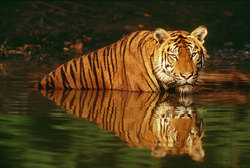 At the Forum here in St. Petersburg we have seen political will at the highest level - heads of government committing themselves to saving the tiger...

World leaders and countries that have wild tigers today endorsed a major plan to double the number of tigers in the wild by 2022 underscoring their commitments at the historic International Tiger Conservation Forum.

Hosted by Russian Prime Minister Vladimir Putin, governments capped a year-long political process with about $127 million in new funding to support the plan, known as the Global Tiger Recovery Programme.

In addition, the World Bank has offered a $100 million loan package to three tiger range countries for conservation work, and the Global Environment Facility committed to provide grants up to $50 million for tiger habitat conservation.

“Too often, conservation efforts languish for lack of political will,” said WWF Director General Jim Leape. “At the Forum here in St. Petersburg we have seen political will at the highest level - heads of government committing themselves to saving the tiger, and laying out concrete plans to turn those commitments into action on the ground.”

“We have never before seen this kind of political support to save a single species,” Leape said. “We now have the strategy needed to double tiger numbers and real political momentum.”

“Initial funding commitments offered here will help get action underway. Much more funding must be mobilized in the months ahead."

"I am confident that we will look back on this day as a turning point in the effort to save one of the world's best-loved animals," Leape said.

The 12-year-plan is an amalgamation of national tiger conservation actions and global targets costing an estimated $350 million during the next five years to halt the decline of tigers.
The $350 million is the remaining cost of the overall plan, not covered by countries holding wild tigers in their individual national plans.

There are as few as 3,200 tigers left in the wild, putting the species on the brink of extinction.

New funding commitments made as a result of the summit process included:

“We hope these historic commitments from world leaders will turn into immediate action on the ground for tigers,” said Michael Baltzer, head of WWF’s Tigers Alive initiative.

“What we really need is immediate action on the ground, meaning stepped up anti-poaching and anti-trafficking work, from the 13 tiger range countries. This must be matched by financial support from the international community.”

Youth delegates from all 13 tiger range countries who participated in the forum presented a special appeal to the leaders to save wild tigers and support the recovery plan.

“What we wanted is for world leaders to hear from young people about the importance of saving tigers, and not from us or bureaucrats,” said WWF-Russia CEO Igor Chestin. “This gave a voice to the public to lend their support to help save wild tigers.”

The Global Tiger Recovery Programme was developed by countries that have tigers, which took more than a year to put together, and lays out a comprehensive set of actions to help tigers recover from decades of poaching and destruction of their forest homes.

The cost of the initial stage of the recovery programme, prepared by the tiger range countries with support from the Global Tiger Initiative of the World Bank, the Global Environment Facility and other tiger conservation partners including WWF, has been largely covered by the tiger range countries themselves, but $350 Million is needed from the international community.

Of this total, the most urgent and critical to the recovery is the need for $35 Million to fill the current funding gap required to protect and monitor the last remaining refuges of tigers, based a on recent study published in PLoS Biology.