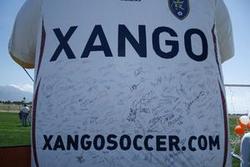 This initiative makes RSL fans the celebrities. Every one of their signatures has great value to a worthwhile international cause. Our World's Largest Soccer Jersey will appear at RSL games and tour other locations to collect fan autographs in the name of charity

XanGo, LLC, recognized creator of the mangosteen supplement category, is collecting the autographs of RSL fans on the "World's Largest Soccer Jersey" between now and the end of the 2007 MLS season to benefit the National Ability Center for skiers with disabilities.

For each signature, XanGo will donate $10, up to 2,000 signatures. The category-creator pledged $20,000 to be donated through this initiative to the National Ability Center (http://www.DiscoverNAC.org) in Park City, Utah. Contributions will be used to fund an Alpine Ski Program for kids from all over the country who come and participate in National Ability Center's program.

"This initiative makes RSL fans the celebrities. Every one of their signatures has great value to a worthwhile international cause. Our World's Largest Soccer Jersey will appear at RSL games and tour other locations to collect fan autographs in the name of charity," said Gordon Morton, president of sales and marketing.

Morton said the World's Largest Soccer Jersey promotion is part of the XanGo Goodness movement, which benefits children and families throughout the world. He noted that National Ability Center was highlighted on the July 9 of the Today Show.

Morton said the World's Largest Soccer Jersey is a mammoth replica of the XanGo branded RSL jersey worn by the team this season. The giant jersey measures 22 ft. long by 15 ft. wide.

To make their mark and help the National Ability Center further its charitable work, RSL fans can sign the World's Largest Soccer Jersey at home games at Rice-Eccles Stadium on the campus of the University of Utah and other locations to be announced between now and the end of the season (see http://www.realsaltlake.com for the team's schedule).

As jersey-front sponsor of RSL, XanGo's historic deal is the first of its kinds in U.S professional sports.

"The National Ability Center is committed to the development of life time skills for people of all ages and abilities by providing affordable sports and recreational experiences in a nurturing environment," said Meeche White, CEO and Founder of the National Ability Center. "We couldn't be more pleased to team with XanGo on this clever and interactive initiative for the people of Utah that will benefit children with disabilities."

About XanGo
XanGo, LLC is a recognized category creator as the first company to market a premium mangosteen drink, XanGo® Juice, to consumers worldwide. XanGo continues to lead the category we created by driving the development and success of functional mangosteen products. Based in Utah, XanGo is privately owned and powered by a global network of independent distributors. XanGo's expansive operations include the U.S. and numerous international markets such as Canada, Mexico, Japan, Germany and Malaysia. For more information on XanGo visit http://www.xango.com.

About National Ability Center
Founded in 1985, the National Ability Center has an extensive skiing program for individuals with disabilities. Some participants have advanced to the level of competing nationally, which led to the development of the Park City Disabled Ski Team, a program of intensive training and coaching specifically for ski racers with physical disabilities. The Center's alpine skiing and snowboarding program works in cooperation with the professional ski school staff of the Park City Mountain Resort. All instructors are specially trained in the adaptive techniques of 3-track, 4-track, mono-ski, bi-ski and guiding blind skiers, as well as techniques for teaching the developmentally disabled. Lessons are conducted on the slopes of the Resort, "mainstreaming" persons with disabilities by enabling them to re-create in an integrated environment with their families, friends and peers.