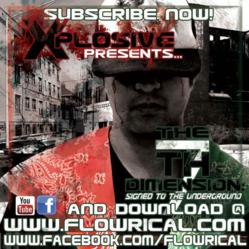 Hip-hop artist XpLosive aka Flowrical has released “The 7th Dimension-Signed to the Underground” mixtape. The 8 track project, presented by Coast 2 Coast Mixtape Promotion, is now available for download.

Jay Chak, stage name XpLosive aka Flowrical was born in Dhaka, Bangladesh. Although he grew up in a third world country, he always found time for music. At 15 years old, he joined a hip-hop forum and began to participate in rap battles and contests. XpLosive released his first independent album at 17 and later formed the group DMC which released one of the most successful hip-hop albums originating in Bangladesh titled “DMC Banned.”

After deciding to separate from the group, XpLosive moved to Australia. He took a break from making music to study the work of his musical influences including 2pac, Immortal Technique, Eminem, Jay Z, Vinnie Paz, Big L, Biggie Smalls, NWA, Hopsin, Mic Shinoda and more.

With a new perspective on music and a goal to stay true to the people, XpLosive has returned to making music. His first released music video “My Salute” has gained popularity online as well as a feature in Sydney’s News Limited’s commuter newspaper. “The 7th Dimension-Signed to the Underground” his XpLosive’s debut solo project. Keep up with all updates by visiting his website.