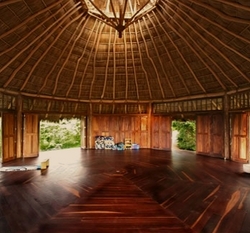 Each year, as the Winter months wind down and Spring approaches, yoga students from regions throughout the country join San Francisco yoga teacher Rosemary Garrison on a journey to a warm, gentle climate in the hidden paradise of coastal Mexico - to take their yoga practice to a deeper level amidst the beauty, serenity, and inspiration of the Sun and sand.

This year's yoga retreat in Mexico will be held at the Haramara in Sayulita, Mexico - an enchanted retreat location nestled within one of the most beautiful coastlines along the Pacific. Known by many as "a sanctuary for the soul," Haramara provides the luscious landscape of beautiful surf and a vast, tropical jungle - setting the backdrop for the enrichment and adventure of the yogic spirit.

The retreat accommodations at Haramara are exquisite: palm-thatch cabanas house large beds with hand-woven sheets - and students can choose from single, double, trio, and dormitory style rooms. Three delicious meals will be served daily, and there will be opportunities for exploration beyond the retreat perimeter - including hiking, kayaking, and horseback riding.

The Mexico yoga retreat will last for seven days and nights, and each day will include a morning and an evening vinyasa flow yoga class followed by teachings around the purpose, philosophy, and power of the yogic practice both historically, and within the context of our modern lives. The yoga sessions will also be used as preparation for daily meditation for those students with a meditation practice, and for those who are interested in beginning meditation.

Featured in the New York Times Travel Section and Food & Wine Magazine, Rosemary's retreats are considered some of the most fun, diverse, rejuvenating, and inspiring weeks of the year by her yoga students, who have traveled from cities all over the country to attend - including New York, Denver, and Boston.

Rosemary’s yoga journey began with the Ashtanga first series taught by renowned Ashtanga yoga teacher Tim Miller, with whom she studied extensively. Years later, further exploration into yogic movement and practice guided her to Vinyasa Flow yoga classes where she found the dance of Vinyasa liberating, beautiful, and alive. She then began practicing with an array of talented teachers within the yoga flow lineage - Max Strom, Dharma Mittra, and Shiva Rea. After a Yoga Alliance Certification, teacher training with David Swenson, and a myriad of other trainings, she began teaching yoga in 2004 and has taught students full-time ever since.