Attached is the official picture of H.E. Yousef Al Otaiba, Ambassador of the United Arab Emirates to the United States. 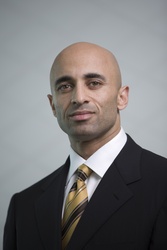