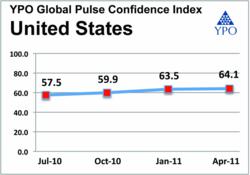 CEOs clearly believe the worst of the recession is behind them. The recent shocks in Japan and the Middle East have not shaken their confidence.

Shrugging off a stream of bad news around the globe, U.S. CEOs responding to the latest YPO Global Pulse survey expressed continued confidence in the outlook for their businesses. The YPO Global Pulse Confidence Index for the United States rose marginally in April to 64.1 from 63.5 in January. This is a record high level for this series, which began at 49.6 after the second quarter of 2009, just as the U.S. economy was emerging from recession, and has been rising steadily ever since. While the U.S. confidence index has lagged the rest of the world from the start of the series, it is now on par with the global sample, which weighed in at 64.3.

The quarterly survey results were announced today by YPO (Young Presidents’ Organization), a not-for-profit global network of 18,000 chief executive officers. The YPO Global Pulse is the only CEO economic sentiment survey to span the globe on a quarterly basis, capturing answers from more than 2,500 CEOs representing businesses of all sizes, including Fortune 1000-size companies. Altogether, the companies run by YPO members employ more than 15 million people and generate US$5.4 trillion in annual revenues.

Key Findings
Construction Sector Catches Up. The biggest contributor to the improved outlook was the construction sector. Since the survey began, it has been the least optimistic sector in the sample but now is just marginally so. In the April survey, 62% of construction CEOs indicated that the overall business and economic climate would be better in the next six months, up from 56% in the prior quarter. This response was on par with the percentage response from production company CEOs and not far behind the 66% response from service sector companies. CEOs in the construction sector also expect to have higher sales this time next year, hire more workers and step up capital spending.

Production Sector Cools Slightly. By contrast, manufacturing firms, which led the economy out of the recession, cooled their expectations slightly, with 65% expecting to increase sales over the next year compared with 71% in January; and 60% expecting business conditions to be better in six months versus 67% last quarter.

Companies Look to Step Up Hiring. That said, all sectors reported more widespread plans to step up hiring. Thirty-four percent of CEOs responding from the production sector, 39% of construction firms and 44% of service companies surveyed said they plan to grow their labor forces by 10% or more over the next 12 months. That is an average of 9% more than last quarter. As a result, the YPO Employment Confidence Index for the United States inched upward in the first quarter to 59.5 from 59.0. This is on par with the global index for employment of 59.9. The U.S. series has been gradually moving higher for the past two years.

Commentary
“The significant improvement in sentiment among construction sector CEOs is especially encouraging, since this industry has not yet participated in the recovery over the past two years,” said Stephen Slifer, YPO Global Pulse economic adviser and chief economist at NumberNomics.

“After lagging most other regions for the past two years, the United States is now as optimistic as the world as a whole,” said Alan Zafran, YPO member and managing partner of California-based investment adviser Luminous Capital. “They clearly believe the worst of the recession is behind them. The recent shocks in Japan and the Middle East have not shaken their confidence.”

Global Results
The YPO Global Pulse Index for the first quarter of 2011 fell marginally to 64.3 from 64.7. The modest decline in the global index is largely attributable to the Middle East and North Africa region, where confidence fell nearly 10 points to 58.3 amidst civil unrest. Latin American confidence fell 2.5 points to 66.2, but the region remains one of the most optimistic in the global sample. Confidence movements in other regions around the globe were slight. Asia remains the world’s most confident region, its confidence index sliding only one-fifth of a point to 68.5 in April. A sharp 8-point index drop in Japan was offset by rising CEO optimism in Hong Kong, Singapore, Thailand and the Philippines and sustained high confidence in China and India.

YPO Global Pulse Confidence Index
The YPO Global Pulse Confidence Index combines CEO answers about expected and most-recent-quarter sales, employee numbers, fixed investment and business conditions. The index is centered on 50. An index reading below 50 indicates a negative outlook – the lower the number, the more negative the outlook. A reading above 50 indicates a positive outlook – the higher the number, the more positive the outlook.

Survey Methodology
The quarterly electronic survey, conducted in the first two weeks of April 2011, gathered responses from 2,582 chief executive officers across the globe, including 1,561 from the United States. Globally, 26% of respondents are from large companies (more than 500 employees), 37% from medium-sized companies (100-500 employees), and 37% from small companies (less than 100 employees). By business sector, 22% of participants are from the production sector, 8% from construction and 70% from the services sector. For more information, go to http://www.ypo.org/globalpulse.

About YPO
YPO (Young Presidents’ Organization) is a not-for-profit, global network of young chief executives connected around the shared mission of becoming Better Leaders Through Education and Idea ExchangeTM. Founded in 1950, YPO today provides 18,000 peers and their families in more than 100 countries with access to unique experiences, world-class resources, alliances with top learning institutions, and specialized Networks that help them enhance their business, community and personal leadership. Altogether, YPO member-run companies employ more than 15 million people around the world and generate US$5.4 trillion in annual revenues. For more information, visit http://www.ypo.org. See us also on Facebook and follow us on Twitter.