‘Right Now is Worth It’ by Thomas Corrigan is both a classic teen story about outcasts who find strength and confidence together and a commentary on the vast impact social media has had on timeless teen dilemmas. 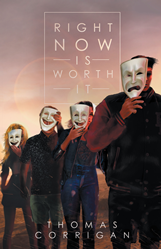 Not being part of the generic ‘popular’ crowd led me to want to write a story about how non-popularity isn’t a bad thing at all. Not fitting in is a good thing, and that’s better to be learned earlier than later.

Emerging young adult fiction author Thomas Corrigan has published a timely YA novel that immerses readers into the social media-centric world of four high schoolers – Emma, Shaun, Sophia and Jackson – and follows each teen’s trajectory as they grapple with angst, peer pressure and personal identity crises.

Emma, a poor teen with an abusive stepfather, has just lost her older sister in a horrific accident. Shaun, a shy and appearance-obsessed boy, is drawn to her. Sophia is a sophisticated rich girl whose life isn’t as perfect as it seems. Jackson is a star athlete grappling with a secret he fears will undermine his carefully cultivated image. While Emma struggles to resolve her parental conflicts, Shaun strives to overcome his awkwardness. As Sophia fights to shed the labels society has thrust upon her, Jackson grapples with keeping his true self under wraps.

Corrigan’s inspiration behind the book came from his own life – as a recent high school graduate and new college freshman, he is no stranger to the societal pressure faced by today’s teens.

“Not being part of the generic ‘popular’ crowd led me to want to write a story about how non-popularity isn’t a bad thing at all. Not fitting in is a good thing, and that’s better to be learned earlier than later,” Corrigan said. “As a mentor of mine said, ‘Most people struggle to be unique because they fit in. You struggle to fit in because you are unique.’ In other words, it’s important to not necessarily be part of the ‘in’ crowd, and this book celebrates that.”

The Internet-obsessed world in which Corrigan’s eclectic cast of characters find themselves reveals that digital support can be inauthentic, and truth often languishes behind pretenses. This rewarding and unpredictable journey highlights the difficult choices the teens face as they fight for independence, attempt to define themselves and, ultimately, protect their social facades.

About the author
Thomas Corrigan is a recent high school graduate and first-year student at Chapman University’s Dodge College of Film and Media Arts. Corrigan is also the author of “The Good Life” – a coming-of-age, hyper-realistic action novel. When he is not attending classes, he enjoys screenwriting, composing, performing live music and bodybuilding. Corrigan currently resides in California. To learn more, please visit http://www.tcpreviews.com.