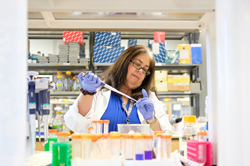 “Heart disease causes about a quarter of all deaths each year,” Lopez said. “It occurs because of a combination of genetic mutations and environmental factors, including lack of exercise and too much fat in the diet.”

“Heart disease causes about a quarter of all deaths each year,” Lopez said. “It occurs because of a combination of genetic mutations and environmental factors, including lack of exercise and too much fat in the diet.”

Statins, a class of medicines known to block cholesterol production in the liver, are widely used to treat patients with high LDL. However, not all patients respond well to statins. Some have serious side effects, and others, including those with a genetic marker for high cholesterol, fail to improve.

A secondary treatment type that controls cholesterol by regulating Proprotein convertase subtilisin/kexin type 9 series, or PCSK9 protein, has been in use since 2015. But this treatment is expensive, costing hundreds of dollars a month, and often not covered by health insurance, Lopez said.

Lopez is now working to develop a third type of treatment that controls PCSK9 using the Alpha 1 antitrypsin protein, a method expected to be lower cost and more affecting in people with genetically based high cholesterol.

“Data from a previous study has given us, for the first time, concrete evidence that Alpha 1 antitrypsin will interact with PCSK9,” Lopez said. “Now we are looking into the mechanics of that. We will be using cell lines from three different ethnic groups: Caucasian, Asian and African American.”

Because of genetic differences, some ethnic groups, including African Americans, are at greater risk for having high cholesterol.

The NIH funding will provide $370,000 per year over four years to assist in development of the potential new treatment.

Along with her research, Lopez is the founder of the startup NIFP Technologies LLC, incorporated in January 2018 to market diagnostic tests and novel therapeutics stemming from the collaborative work of Lopez and Associate Professor of Biology Sean Kimbro, Ph.D. Other company partners include NCCU biosciences researcher Quantil Melendez, Ph.D., who serves as chief executive officer, and BRITE science researchers Catherine Wooten, Ph.D., and Sumaira Ahmed, Ph.D.