The hilarious musical parody of four women at a lingerie sale with nothing in common but a black lace bra and memory loss, hot flashes, night sweats, not enough sex, too much sex and more is back by popular demand. 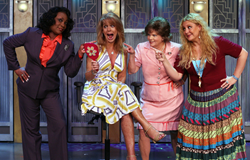 MENOPAUSE THE MUSICAL® has entertained audiences across the country in more than 450 U.S. cities, nearly 300 international cities and a total of 15 countries.

The international hit show MENOPAUSE THE MUSICAL® has identified Worcester as a ‘hot’ national market and will play The Hanover Theatre for the Performing Arts for one performance only on Sunday, June 1, at 2PM. It doesn’t necessarily mean women in Worcester are more prone to symptoms of “The Change.” It does mean they will find joy in sharing their experiences! Tickets are on sale now and can be purchased online at TheHanoverTheatre.org, by phone at 877.571.SHOW (7469), or at The Hanover Theatre box office located at 2 Southbridge Street in downtown Worcester.

Set in a department store, where four women with seemingly nothing in common but a black lace bra meet by chance at a lingerie sale. The all-female cast makes fun of their woeful hot flashes, forgetfulness, mood swings, wrinkles, night sweats and chocolate binges. A sisterhood is created between these diverse women as they realize that menopause is no longer “The Silent Passage.” It is a stage in every woman’s life that is perfectly normal.

MENOPAUSE THE MUSICAL® is produced by GFour Productions and is the work of writer, Jeanie Linders; director, Seth Greenleaf; and choreographer, Daria Melendez. The laughter-filled 90-minute production includes parodies from the classics of the ‘60s, ‘70s, and ‘80s. It is estimated that nearly 11 million women have attended a performance since the 2001 opening in Orlando, Florida. Inspired by a hot flash and a bottle of wine, writer and producer Jeanie Linders created the show as a celebration of women who are on the brink of, in the middle of, or have survived “The Change.”

MENOPAUSE THE MUSICAL® has entertained audiences across the country in more than 450 U.S. cities, nearly 300 international cities and a total of 15 countries. For more information, visit MenopauseTheMusical.com.

Tickets to MENOPAUSE THE MUSICAL® are $35, $40 and $45* with a 10% discount available for members of The Hanover Theatre, groups of 10 or more, corporate partners and WOO Card holders. Tickets are available online at TheHanoverTheatre.org, by phone at 877.571.SHOW (7469), or at The Hanover Theatre box office located at 2 Southbridge Street in downtown Worcester.

About The Hanover Theatre
The Hanover Theatre continues to draw over 170,000 patrons annually with world-class performances and headlining acts including Broadway hits (Les Misérables, Mary Poppins, Jersey Boys); comedians (Steve Martin, George Carlin, Bill Cosby); musical acts (Neil Young, Aretha Franklin, The Moody Blues, Diana Ross); and everything in between (A Christmas Carol, Maya Angelou, Rudy Giuliani, Alvin Ailey American Dance Theatre). Ranked by POLLSTAR as one of the Top 50 Theatres in the World, the theatre opened in March of 2008 following a $32 million historic renovation. Over the last six seasons, the theatre has established its place as a world-class performing arts venue, acting as a catalyst for the economic development of downtown Worcester. For more information, visit TheHanoverTheatre.org. Worcester Center for the Performing Arts, a registered not-for-profit 501(c)(3) organization, owns and operates The Hanover Theatre for the Performing Arts. All donations are tax deductible to the fullest extent allowed by law.

About GFour Productions
GFour Productions' most recent successes are the Tony Award-winning 50th anniversary production of Edward Albee's “Who’s Afraid of Virginia Woolf,” the four time Tony Award, five time Drama Desk Award®, and seven time Olivier Award-winner for Best Musical, “Matilda The Musical,” and the critically acclaimed revival of “The Glass Menagerie” starring Cherry Jones and Zachary Quinto which the NY Times recently called "Glorious and Gorgeous!" Their critically acclaimed follow up to MENOPAUSE THE MUSICAL®, “Motherhood The Musical,” has recently entertained audiences in Fort Lauderdale, Tampa, Atlanta, Dallas-Ft. Worth, and Philadelphia and is currently playing a 65-city Australian tour. This year for the first time ever, GFour will present MENOPAUSIA EL MUSICAL®, a Spanish-language version of the international hit MENOPAUSE THE MUSICAL® at the historic Ricardo Montalbán Theatre in Hollywood, CA. They began producing in 1981 with “Nine,” winning the Tony Award that year for Best Musical. Among their favorite Broadway productions are “My One and Only” starring Tommy Tune, “Zorba The Greek” starring Anthony Quinn, “The Rink” starring Liza Minnelli, “Baby, Grand Hotel, Grind, Big, True West,” the original and the revival of “La Cage Aux Folles” which won them Tony Awards for Best Musical in 1983 and Best Revival in 2004. Their combined shows have been nominated for 115 Tony Awards, winning 44 and 110 Drama Desk Awards, winning 56. For more information, please visit GFourProductions.com.

*Ticket prices are subject to change without notice.