Native Americans on Pine Ridge are benefiting from the generosity of Crocs Cares, who donated 600 pairs of diabetic shoes in partnership with National Relief Charities. 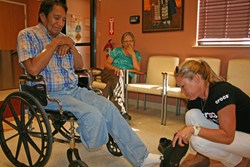 Giving back has always been a priority for Crocs.

Native Americans on the Pine Ridge Reservation are receiving special shoes today from
Crocs Cares(sm). The 600 pairs of shoes are beneficial for people with diabetes. They are being distributed at the tribe’s pow wow grounds in South Dakota, in conjunction with a health fair.

Native Americans have the highest prevalence of type 2 diabetes in the world, affecting young and old alike. Their risk of diabetes is twice as high as any other ethnic group in the U.S. Diabetes also invites other health complications such as heart disease, hypertension, kidney disease, nervous system damage, gum disease, loss of limbs, and foot problems.

The shoes donated by Crocs Cares are wider and aerated, adding comfort for swollen diabetic feet. The extra width of the shoes can also accommodate diabetic socks. Melissa Koester, Manager of Crocs Cares, was on hand to assist with the distribution at Pine Ridge.

“Giving back has always been a priority for Crocs,” Koester said, “Crocs has donated millions of shoes in developing countries, and with great partners like National Relief Charities, Crocs can provide shoes throughout the U.S.”

The partnership between Crocs and National Relief Charities (NRC) evolved around NRC’s ongoing relationship with the reservations. The Native American communities served by NRC estimate that 30% to 50% of tribal members suffer from diabetes. NRC’s goal is to support positive change and make a difference for Native American people.

About Crocs: Crocs, Inc. is a world leader in innovative casual footwear for men, women and children. Crocs offers several distinct shoe collections with more than 300 four-season footwear styles. All Crocs™ shoes feature Croslite™ material, a proprietary, revolutionary technology that gives each pair of shoes the soft, comfortable, lightweight, non-marking and odor-resistant qualities that Crocs fans know and love. Crocs fans "Get Crocs Comfort Inside" every pair of shoes, from the iconic clog to new sneakers, sandals, boots and heels. Since its inception in 2002, Crocs has sold more than 200 million pairs of shoes in more than 90 countries around the world. The brand celebrated reaching $1 billion in annual sales in 2011. Get social with Crocs – http://www.facebook.com/crocs, http://www.twitter.com/crocs, and http://www.pinterest.com/crocs.