Pixel Film Studios collection of 40 professionally made old film effects for Final Cut Pro X allows users to add moving textures and color burns to film to give it that aggressive or vintage look. 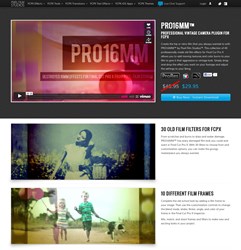 "With the ability to customize and mix and match the filters, PRO16mm is a really versatile film effect plugin for Final Cut Pro X," said Christina Austin, CEO of Pixel Film Studios, "You can go from an old vintage look to a grungy aggressive style in the few clicks of a mouse in FCPX."

From scratches and burns to drips and water damage, PRO16mm has every damaged film look editors could ever want in Final Cut Pro X. With 30 filters to choose from and customization options, users can make the grungy masterpiece they always wanted.

Filmmakers can complete the old school look by adding a film frame to their image. Then use the customization controls to change the blend mode, shake, flicker, angle, and color of their frame in the Final Cut Pro X Inspector. Then they can mix, match, and stack frames and filters to make new and exciting looks in their project.

Whether users are making a video of a kid's birthday party or a grungy skater video, PRO16mm can give a film the look they are going for in Final Cut Pro X. By simply changing the blend mode, color, contrast, and saturation, filmmakers can watch as their film goes from vintage to grunge in front of their eyes.

PRO16mm was professionally created to work seamlessly with FCPX. Editors can instantly customize their settings in the FCPX Inspector and see the changes appear on the image in real-time. PRO16mm is a powerful plugin that will completely change the look of a film.