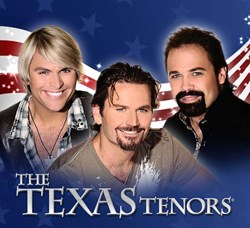 The Texas Tenors will perform at FMCA's Family Reunion in Perry, Georgia, in March 2014.

Family Motor Coach Association (FMCA), one of the sponsors of a PBS concert featuring the Texas Tenors vocal trio this past spring, has announced that the group will perform at the association’s 89th Family Reunion and Motorhome Showcase in Perry, Georgia, March 19, 2014.

Millions of viewers met the singers as they competed on NBC-TV’s “America’s Got Talent” in 2009. To date, they remain the highest-ranking vocal group in the show’s history.

Each individual brings something different to the group. John Hagen shows his vast classical music experience, having performed in numerous national operas and Broadway shows. JC Fisher, who was raised on a cattle ranch, adds the country and gospel influence. And Marcus Collins infuses the group with raw emotion and a contemporary pop sound.

Tunes from the group’s newest CD, “You Should Dream,” scheduled for release later this year, were performed during the taping of the PBS concert on May 13, 2013, at Grand Canyon University in Phoenix, Arizona. The trio was accompanied by the Phoenix Symphony and the New Life Singers university choir.

The May 13 show was recorded for a PBS special, “The Texas Tenors: You Should Dream Live,” which will air on PBS stations nationwide as part of the network’s December 2013 and spring 2014 membership campaigns.

More than 1 million DVDs of the show, which will include spotlights related to Family Motor Coach Association and other sponsors, will be distributed as part of the PBS membership drive.

The Texas Tenors have performed more than 500 concerts in 20 countries since “America’s Got Talent.” They will add to that number when appearing for FMCA attendees March 19, 2014, during the group’s 89th Family Reunion and Motorhome Showcase at the Georgia National Fairgrounds in Perry.

The Tenors previously performed at the association’s 84th International Convention in Redmond, Oregon, in August 2010.

Other performers slated to appear during the association’s 2014 event in Perry are Southern humorist/speaker Jeanne Robertson, March 18, and singer/songwriter Sarah Getto, March 20.

Family Motor Coach Association, founded in 1963, currently is celebrating its 50th year of serving motorhome owners in North America and beyond.

About Family Motor Coach Association • Enhancing The Motorhome Lifestyle
Family Motor Coach Association (FMCA) is an international organization for families who own and enjoy the use of self-contained, motorized recreation vehicles known as motorhomes. The association maintains its national headquarters in Cincinnati, Ohio, and currently has nearly 80,000 active member families. FMCA offers a number of benefits for motorhome owners, including a subscription to its monthly magazine, Family Motor Coaching; trip routing; mail forwarding; group rates on a medical evacuation program and motorhome insurance; discounted rates for RV tours and caravans; and a tire purchasing program. Perhaps the most important benefit of FMCA membership is the camaraderie and friendships that develop among people enjoying the common interest of motorhome travel and recreation. The organization can be reached toll-free at (800) 543-3622 or on the Web at FMCA.com.