The Transnational Government of Tamil Eelam (TGTE) re-elected Visuvanathan Rudrakumaran to his second term as prime minister. Tamils for Obama offers him congratulations. 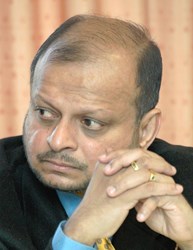 The Transnational Government of Tamil Eelam (TGTE) re-elected Mr. Visuvanathan Rudrakumaran as their Prime Minister for their second Parliamentary term on December 6, 2013.

Presently, in addition to the campaign for an international investigation, TGTE is also campaigning for an International Protection Mechanism for Sri Lankan Tamils and to secure the release of documents on Tamils prepared by the Office of the Special Advisor to UN Secretary-General on Prevention of Genocide.

"Rudrakumaran and Tamils for Obama share the same goal. Both believe that referendum among Tamils inside Sri Lanka and Tamil diaspora will contribute to the political solution to the conflict" said a spokesman for Tamils for Obama.

"Also, we see the purpose of TGTE as laying the foundation for an independent Tamil Eelam and democracy in the northeast of Sri Lanka" he continued.

"Under Rudrakumaran's leadership, we trust that process has begun.”

"It is noteworthy that TGTE's Constitution mandates that it should realize its political objective only through peaceful and democratic means" continued the spokesman.