An Actos bladder cancer lawsuit recently filed by Wright & Schulte LLC contends a man from Georgia allegedly developed bladder cancer as a result of taking the type-2 diabetes drug Actos for more than 12 months. This case also alleges that Takeda, the manufacturer of Actos, knew about the link between Actos use and bladder cancer and, yet, failed to warn the public and medical professionals about this serious risk. 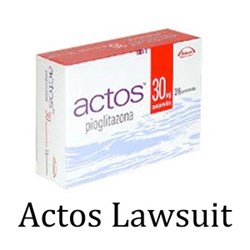 Wright & Schulte LLC offers FREE Actos lawsuit evaluations to those who have been diagnosed with Actos bladder cancer. Visit www.yourlegalhelp.com, or call 1-800-399-0795

Wright & Schulte LLC offers FREE Actos lawsuit evaluations to those who have been diagnosed with Actos bladder cancer. Visit www.yourlegalhelp.com, or call 1-800-399-0795

The Lawyers at Wright & Schulte’s have recently filed an Actos lawsuit on behalf of a Georgia man. The Actos lawsuit alleges that taking Actos diabetes medication for more than one year caused the plaintiff to develop bladder cancer. According to the complaint, this case also contends that Takeda was aware of the possibility of Actos bladder cancer and concealed this serious risk from the public and medical professionals. The Actos bladder cancer lawsuit (Case No. 2013L005777, Consolidated Actos Lawsuit No. 2011 L 10011) was filed in the Circuit Court of Cook County, Illinois and names Takeda Pharmaceuticals, Inc. as the defendant.

Bladder Cancer Risk Increases with Extended Actos Use, Warn Researchers and the FDA

In 2011, the American Diabetes Association published a study regarding the alleged risk of bladder cancer when taking Actos (generically known as pioglitazone). The study focused on adverse event reports (AER) associated with Actos that had been filed with the FDA between 2004 and 2009. After conducting an extensive review, researchers found that patients had a statistically significant increase in their risk of developing bladder cancer when they had taken Actos for more than one year. Specifically, researchers stated that, “[i]n agreement with preclinical and clinical studies, AERS analysis is consistent with an association between pioglitazone and bladder cancer. This issue needs constant epidemiologic surveillance.” [diabetesjournals.org/content/34/4/916.full January 2011]

Soon thereafter, in June 2011, the FDA issued a national Actos warning to alert the public that “use of the diabetes medication Actos (pioglitazone) for more than one year may be associated with an increased risk of bladder cancer.” Specifically, the FDA pointed out that Actos patients who took the drug for longer than 12 months had about a 40 percent increased risk of developing bladder cancer (when compared to individuals not taking Actos). At that time, the FDA also ordered Takeda to update the warning labels on Actos medication to include information about the risk of bladder cancer. [fda.gov/Drugs/DrugSafety/ucm259150.htm June 2011]

About Wright & Schulte LLC
Wright & Schulte LLC, an experienced personal injury firm, is dedicated to the belief that America’s legal system should work for the people. Every day, the attorneys of Wright & Schulte LLC stand up for the rights of people who have been injured or wronged and fight tirelessly to ensure that even the world’s most powerful corporations take responsibility for their actions. If you’re looking for a law firm that will guarantee the aggressive and personal representation you deserve, please do not hesitate to contact Wright & Schulte LLC today. Free case evaluations are available through http://yourlegalhelp.com/ or by calling 1-800-399-0795.