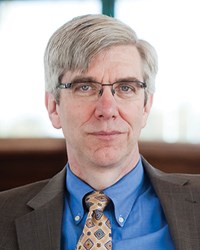 'We want to congratulate Dr. Talamini on this exceptional honor and to thank him for his continued leadership and involvement in SAGES,' said Dr. Gerald M. Fried, SAGES President.

“We want to congratulate Dr. Talamini on this exceptional honor and to thank him for his continued leadership and involvement in SAGES,” said Dr. Gerald M. Fried, SAGES President. The lecture is named for the Excelsior Surgical Society, a group of 80 medical officers who met for the first time in 1945 at the Excelsior Hotel, Rome, Italy. It also honors Col. Edward D. Churchill, a famous surgeon and consultant to the U.S. Army in the World War II Italian Theatre, who presented the first keynote address at this meeting.

Dr. Mark A. Talamini recently joined Stony Brook Medicine in New York as the new chairman of surgery. Dr. Talamini previously served as the Marshall J. Orloff Family Endowed Professor and chair of the department of surgery at the University of California, San Diego (UCSD) School of Medicine. He is a pioneer in the area of minimally invasive surgeries relating to the abdomen and is a leading authority on laparoscopic and robot-assisted surgery in the United States. He also has a special interest in telemedicine—the practice of delivering health care from a distance—which he used in a groundbreaking way to guide military doctors performing procedures aboard a ship in international waters.

From 1992 to 2004, Dr. Talamini was the director of minimally invasive surgery at The Johns Hopkins Hospital in Baltimore, MD. His professional practice interests are in the areas of inflammatory bowel diseases, gastroesophageal reflux disease, pancreatic cancer, gastric cancer, and colon cancer, and he is a member of the American Hepato-Pancreato-Biliary Association. He has more than 200 peer-reviewed publications and has contributed a chapter to more than 40 books.

Dr. Talamini is currently on the SAGES Board of Governors and has served on the board since 2001. During this time he has served as SAGES President, Finance Committee Chair and Treasurer. He is currently serves on the Journal, Nominating & Publications Committees. Dr. Talamini’s recognitions include a MAP-Reader’s Digest International Fellowship-Externship in Bangladesh in 1980, the R.W. Hart Prize for excellence in developing concepts for telemedicine systems in 1995, and the Alpha Omega Alpha Honor Medical Society in 2002.

About SAGES
The mission of the Society of American Gastrointestinal and Endoscopic Surgeons (SAGES) is to improve quality patient care through education, research, innovation and leadership, principally in gastrointestinal and endoscopic surgery. SAGES is a leading surgical society, representing a worldwide community of over 6,000 surgeons that can bring minimal access surgery, endoscopy and emerging techniques to patients worldwide. The organization sets the clinical and educational guidelines on standards of practice in various procedures, critical to enhancing patient safety and health. For more information, visit http://www.sages.org.