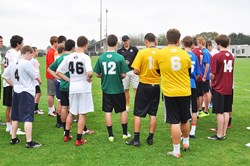 Chris Shaw Working With Kickers an the NCS Super Camp

Shaw develops trains, and mentors kickers, punters and snappers all over the country while instilling a strong work ethic.

With over 18 years of on the field punting and kicking experience, Chris Shaw has become one of the most sought after Kicking, Punting, Snapping and Special Teams Consultants in the NATION.

Shaw has spoken at AFCA several times, crossed the country to work with several colleges, and has also worked with over 200 high school coaches helping them to break down the kicking, punting and snapping game.

Shaw develops trains, and mentors kickers, punters and snappers all over the country while instilling a strong work ethic, and solid foundation along with a winning attitude. He has an exceptional track record of successful and aggressive business development and marketing plans (including strategy, planning, execution and post-analysis).

Kicking coach Michael Husted, who created the National Camp Series (NCS) after kicking in the NFL for 9 years, says having a kicking coach like Chris Shaw attests to the quality of coaches at NCS events.

Husted says he is very happy to have a kicking coaches like Chris Shaw as part of the NCS team.

“Chris Shaw is an excellent kicking coach,” says Husted. “He helped me with the NCS Super Camp in Florida earlier this year. I’ve enjoyed working with him on all his NCS events in 2012.”

Husted says it is coaches like Shaw, and the objective way that NCS evaluates and ranks players, for the continued growth of the National Camp Series.

"2012 shaped up to be the best year yet for the National Camp Series,” says Husted. “After having introduced our Kicking IndeX (KIX) Player Rating System, we are positioned extremely well in 2013 to leverage analytics to showcase our athletes and to provide ‘objective high school kicking specialist’s statistics to college and university coaches.”

"The NCS levels the playing field for those who don't want to get caught up in all of the 'politics' that occurs in the kicking industry,” says Husted. “If you can kick, punt or snap, the NCS KIX system will let a young kicking specialist’s skills speak for themselves. No excuses. No explanations.”