‘In the Mind of the Maker’ Documentary Film Launches IndieGoGo Campaign 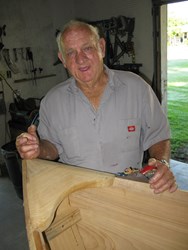 We wanted to give the community the chance to support Mr. Couvillier and the rich boat building tradition he represents.

Producers of the upcoming independent film ‘In the Mind of the Maker’ announced the start of a crowdfunding campaign on IndieGoGo. Contributions will go to award an honorarium for the central figure of the film, an 85-year-old master boat builder named Edward Couvillier, as he struggles to preserve his ancestral craft in the swamps of Cajun country.

“This film is underwritten largely by corporate sponsors,” explained John Durel, executive producer of ‘In the Mind of the Maker.’ “But friends and followers of the show have been asking how they can help too, so we wanted to give the community the chance to support Mr. Couvillier and the rich boat building tradition he represents.”

The documentary explores the science behind creativity and examines how the human brain generates visual imagery through memory and imagination. These themes are conveyed, however, through the simple story of an elderly craftsman building his last boat in the Atchafalaya Basin swamps of French Louisiana.

“Mr. Couvillier is an ideal example of how creativity is mysteriously rooted in mental imagery,” explained C.E. Richard, the film’s director. “Our boat builder crafts these incredibly beautiful cypress boats without any plans or blueprints. He just builds what he sees in his mind’s eye.”

Funds for Mr. Couvillier’s work are being raised through IndieGoGo, a popular vehicle among independent filmmakers.

“The money will go to Mr. Couvillier to cover the costs of his materials, and it will allow us to honor his work with a nice stipend,” said Durel. “We felt that crowdfunding is a good way to show community support for heritage preservation, beyond anything that corporate sponsors can do.”

Producers especially encourage contributions from people who appreciate Louisiana's Cajun culture, and from supporters of the University of Louisiana at Lafayette, a leading sponsor of the film.

“Lots of people have seen ‘Swamp People,’” Richard said, referring to the popular reality tv show. “But Mr. Couvillier is the real thing. He demonstrates an uncommon genius.”

John Durel added that, in addition to the crowdfuding campaign, corporate sponsorship opportunities are still available, and that UL Lafayette supporters can learn how they can help promote the school’s mission through this film by contacting:

'In the Mind of the Maker' Movie Poster