In his keynote address at the sixth Asian Vegetarian Congress, prominent Asian Entrepreneur, Dato Sri Vijay Eswaran said limiting or abstaining from meat consumption would consume less of our limited resources on earth. 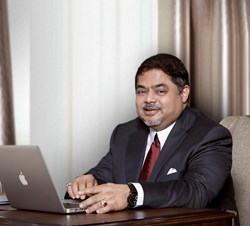 The sixth Asian Vegetarian Congress which opened here today was told that the global population has the power to help reduce global warming by turning towards a vegetarian diet that would help make a difference to the planet.

He pointed out that the livestock sector has emerged as a very significant contributor to environmental problems at every scale from local to global, including land degradation, climate change and air pollution, water shortage and loss of biodiversity.

Hence, he urged the Congress to send out a strong message to stop all killings and to create better public awareness of the importance of consuming more plant-based food.

Having been instilled a deep abhorrence towards violence when he was young, he stressed: “Let’s not have any more pain in the world. There’s enough pain already,” referring to the slaughter of millions of animals annually around the world.

Vijay, who is Executive Chairman of the QI Group, said vegetarianism is more than just a personal belief. It is part of the corporate philosophy of the company he founded with his partner, also a vegetarian.

“The 15 year old QI Group that employs more than 1000 people in nearly 30 different countries is a fully vegetarian company. The primary consideration here for us is the four main pillars of vegetarianism, namely environment health, biological and ethical.

“It is a philosophy that we actively propagate internally to our employees, though by no means is anyone forced to convert to vegetarianism. However, the company has embraced this concept since its inception and has continued to take a firm stance on it.

“Additionally, Mahatma Gandhi, who is the corporate icon of the QI Group propagated the concept of ahimsa, a Sanskrit term which means non-violence. This translated into the practice of vegetarianism which Gandhi lived by, and propagated vehemently,” added Vijay.

Appearing as the first keynote speaker at the congress attended by about a thousand local and foreign delegates, Vijay said the encouraging resurgence of vegetarianism, especially in Asian countries, is attributed to reasons such as religion, concern for health, the environment and the compassion for animals.

When asked whether vegetarianism is changing the world, he quickly noted: “Yes, we have more than 1000 vegetarian restaurants in the Klang Valley alone today and it’s a good sign that we don’t pay anything that contributes to killing.”

The two day congress was earlier opened by deputy minister of health Malaysia, Dato Seri Dr Hilmi bin Haji Yahaya. It is hosted by the Malaysian Vegetarian Society and supported by the International Vegetarian Union (IVU) and the Ministry of Health. The QI Group is one of the main sponsors of the congress which is also being held in conjunction with the 41st IVU World Vegefest at Lake Titiwangsa, Kuala Lumpur.