Kate McCallum, Founder and Executive Director of c3: Center for Conscious Creativity and Chair of the Global Arts and Media Node of The Millennium Project was voted onto the Board of the Producers Guild of America's New Media Council 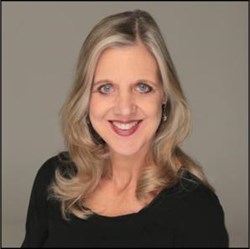 Kate McCallum, who serves as Chair of the Global Arts and Media Node of The Millennium Project, was voted onto the Board of the Producers Guild of America's New Media Council. A 30 year industry veteran in the entertainment and arts industries in Los Angeles, California, Kate also serves as the Founder and Executive Director of c3: Center for Conscious Creativity whose mission is to "Create a better future through arts and media." Each year the c3 presents a symposium at the Los Angeles Center Studios in downtown Los Angeles called STATE OF THE ARTS in association with The Millennium Project. This year's STATE OF ARTS 2013 theme addresses the power of immersive and interactive storytelling and will be co-produced with Immersive Media Entertainment Research Science and Arts Association.

"It's a great honor to be nominated as a Board Delegate to the Producers Guild of America New Media Council, and I look forward to continuing to bring awareness of the work of The Millennium Project and its 15 Global Challenges to PGA Members,” says Kate McCallum. “Storytelling is one of the most powerful ways to envision and model the future we wish to live in." The PGA New Media Council was formed by the Producers Guild of America (PGA) in 2002, in order to recognize, represent, and protect producers working in emerging media such as DVDs, broadband and mobile entertainment, interactive television and video games.

The PGA protects and promotes the credit and role of the entertainment producer. Since its formation, the Council has sought to identify and address issues relevant to New Media and the PGA. These include how "new media" should be defined, and how the role of a new media producer differs from or is similar to its counterpart in traditional media, recognizing that medium must serve the story and not the other way around.

The Producers Guild of America is the non-profit trade group that represents, protects and promotes the interests of all members of the producing team in film, television and new media. The PGA has over 5,000 members who work together to protect and improve their careers, the industry and community by facilitating members health benefits, encouraging enforcement of workplace labor laws, the creation of fair and impartial standards for the awarding of producing credits, as well as other education and advocacy efforts. The PGA hosts important industry events including the annual PGA Awards and the Produced By Conference.

The Millennium Project is a global participatory think tank that produces the annual "State of the Future" reports, the "Futures Research Methodology" series, Global Futures Intelligence System, and related software, and special studies. The Millennium Project has about 50 Nodes around the world that identify participants, translate questionnaires and reports, conduct interviews, initiate and conduct special research, workshops, symposiums, and advanced training. The Millennium Project’s mission is to improve thinking about the future and make it available through a variety of media for feedback to accumulate wisdom about the future for better decisions today.