"Get Your Shirt Together" Says Inventor and Maker of Facebook, Google, Target Cufflinks

Cuffwear founder and inventor ready to mass produce the "anycuff link" device that will expand the cufflink market; seek crowdfunding assistance from Kickstarter’s global community to kickstart the next generation of cufflinks wearable on any ready-to-wear button cuff shirts - no French cuffs required. 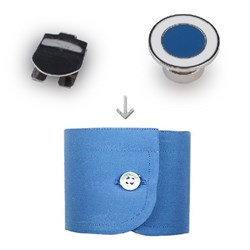 I thought of all the button cuff shirts in major retailers - Topshop/Topman, Zara/Zara Man, Target, J. Crew, H&M - that I wanted to give the style-conscious consumer the choice to accessorize, complementing French cuff shirts

Cuffwear Inc. and inventor Marcus Duffin have launched their Kickstarter.com crowdfunding campaign for a new patent pending magnetic cufflink called the "anycuff link." This new design allows anyguy or anygirl to wear cufflinks on any button cuff shirt. With the successful outcome of raising a minimum of $18,000 by November 4, 2013, they will “kickstart” the production of this new generation of cufflinks.

Cuffwear founder, Chris Zownir, is a leader in the cufflink design and production industry who creates collections under his own private label and also produces for corporate clients including Facebook, Google, Target, Lexus, and MTV to name a few.

He was looking for a way to make cufflinks more accessible and to expand the cufflink industry to less formal shirts. “Traditional cufflinks worn on more tailored, formal French cuff shirts are my business and my passion, but I kept thinking of all the button cuff shirts found in major trendsetting retailers such as Topshop/Topman, Zara/Zara Man, Target, J. Crew, H&M, and so on, that I wanted to give the style-conscious consumer the choice to accessorize, complementing the French cuff market.” Coincidentally, Zownir was introduced to Marcus Duffin, an inventor from Portland Oregon who had created a patent-pending magnetic cufflink device that has the look, weight and feel of a traditional cufflink but is used on a button cuff. After the two met, the anycuff was born.

The anycuff link is a two-piece cufflink device: the Button Slider slides onto the button on one side of the cuff, while the stylized top piece has a super strong N52 magnet that fits through the button hole on the other side of the cuff.

The funds raised will help to offset production and operational costs. The process of product development to manufacturing and distribution can be costly, which is where the support of crowd-sourced funding is helpful.

“Crowdfunding is the perfect way to launch this new generation of cufflinks as we want people to feel connected to the brand and feel that they have participated in the brand’s creation process and growth from day one,“ says Duffin. “Kickstarter validates and helps a project gain traction, while giving everyday consumers an opportunity to be part of the some of the greatest innovations in the world.”

A wide range of pledges with corresponding rewards are outlined on the Kickstarter campaign page, starting at $1 to $1,000+ (at the highest level, backers get to design their own pair of sterling silver anycuff links that will be made in the USA).

Cover your buttons…
… and get your shirt together.

ABOUT THE INVENTOR - MARCUS DUFFIN
Marcus Duffin is an inventor from Portland, Oregon has spent his days thinking of new ideas focused on making everyday tasks simpler. While completing his MBA, Duffin conceptualized the anycuff device after watching an episode of the hit TV show Shark Tank. He realized that most of the shirts in his closet could not be accessorized with cufflinks as most were button cuff shirts. He decided to change that.

ABOUT CUFFWEAR
http://www.cuffwear.com / http://www.anycuff.com
Cuffwear offers a collection of over 100 styles of cufflinks through their ecommerce site, cuffwear.com and distributes to retail stores across North America. Cuffwear is also a supplier of custom logo cufflinks to some of the largest companies in America. Cuffwear's corporate projects include Facebook, Google, Target, MTV, Under Armour, Amstel Light, Lexus and many more.

ABOUT KICKSTARTER
http://www.kickstarter.com
Kickstarter is a leading online crowdfunding platform for projects within the fashion, design, art, music, technology and film industries. Kickstarter is full of projects, big and small, that are brought to life through the direct support of individuals. Since the launch in 2009, 4.9 million people have pledged $814 million, funding 49,000 creative projects.