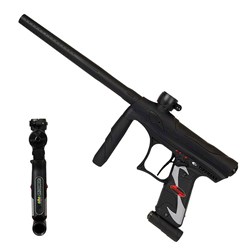 The Tippmann Crossover is a lightweight, high performance tournament-style paintball marker designed to handle the rigors of woods-ball tournament or any style of play. The Tippmann Crossover paintball gun features low pressure operation, a must for any serious player and comes with an aluminum receiver, internal gas line, clamping feed-neck, 12” high performance barrel, double finger blade trigger, bottom regulator with ability to convert to a front regulator and, of course, Tippmann’s World Class 2-year Warranty.

Thanks to the Tippmann Crossover paintball gun, gone are the days when players had to choose between a mechanical or electric marker. Much like the Tippmann phenom. Through the use of FlexValve technology a paintball player can switch from electronic or mechanical mode on the fly and under attack. Now, a player may be wondering why would anyone want or need a feature like that on their paintball gun. Easy, when players are out all night with friends and forgot to change the battery in the paintball marker and now the player is pinned inside the bunker. Flip a switch and the paintball gun is now mechanical. Fire away and become a hero for the team.

The other advantages of adding the Tippmann Crossover Paintball gun to a paintball players arsenal, like all Tippmann gear, players are getting the highest quality product designed to be durable and accurate. Players will also find that the multiple firing modes will allow massive fire power to tear up some arrogant tourney players on a hyper ball or speedball field. The firing modes include semi-automatic, 3-shot burst, response, nppl millenium PSP mode.

Tippmann has a long history of providing ground breaking technology and great products that allow players to have a paintball gun that enhances their game performance. The Tippmann Crossover is the gun you are looking for.