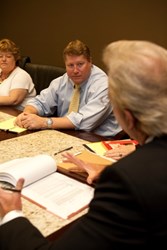 It is always our greatest pleasure to provide the means for a family to be able to deal with a catastrophic injury.

The personal injury lawyers of Bisnar | Chase have obtained a $30-million judgment (Case number: 30-2012 00542712) for 25-year-old Lucas Vogt, who suffered a catastrophic brain injury in a 2011 motorcycle accident. The personal injury lawsuit was filed in Orange County Superior Court on Feb. 6, 2012.

"It is always our greatest pleasure to provide the means for a family to be able to deal with a catastrophic injury," Ritsema said. "We hope Lucas Vogt will be able to have the best recovery he can under the circumstances and maximize his time with his 2-year-old daughter."

According to court documents, the motorcycle accident occurred the evening of July 25, 2011, during rush hour traffic. Vogt was riding between the number one and two lanes on the 91 Freeway near Gypsum Canyon Road in Anaheim when the defendant, Andrew Saldate, attempted to make a lane change and collided with Vogt's motorcycle, the complaint states. The impact of the collision knocked Vogt from his motorcycle and into traffic lanes where he was struck by two other vehicles – a 2005 Jeep Liberty driven by Shana Johnson and a 2000 BMW 328i driven by Lori Dunbar, court documents state. Johnson and Dunbar both settled rather than proceed to trial.

Vogt was treated by paramedics at the scene and was later transported to a trauma center, court documents state. He suffered a traumatic brain injury in addition to multiple fractures, road rash and other serious injuries. He had to undergo surgeries and extensive rehabilitation for his brain injury, according to the complaint.

Although he has made "significant progress" since the accident, he is still unable to walk or communicate verbally, Ritsema said. Victims of catastrophic injuries such as Vogt go through tremendous physical, emotional and financial challenges and in addition to the victims, their families also suffer life-changing consequences, he said. Vogt's medical expenses to date add up to about $2 million, the complaint states.

"Lucas has a long road to recovery," Ritsema said. "But we hope that the compensation he receives will help him take a few more steps in the right direction. We hope it will give him the best chance at making a recovery and enhancing his quality of life."

Bisnar | Chase represents victims of serious and catastrophic injuries including motorcycle accidents. The firm has been featured on a number of popular media outlets including Newsweek, Fox, NBC, and ABC and is known for its passionate pursuit of results for their clients. Since 1978, Bisnar | Chase has recovered millions of dollars for victims and their families. For more information, please call 800-561-4887 or 949-203-3814 or visit http://www.bestattorney.com for a free consultation. We are located at 1301 Dove Street #120, Newport Beach, CA 92660.