Douglas E. Richards, New York Times bestselling author and expert on psychopathy, explains why being a psychopath can seem almost like a job requirement for a politician. 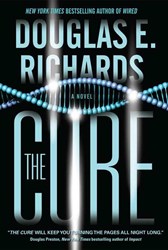 Richards has spoken extensively about the behavior patterns of psychopaths

An AP poll released on October 9th gave Congress a dismal 5% approval rating, and surveys show that many people find politicians to be deplorable. But are they psychopaths? "One percent of the population can be classified as psychopathic," said Douglas E. Richards, a New York Times bestselling author and expert in psychopathy, "and this percentage is likely to be far higher among our political class."

Richards has a master's degree in molecular biology, served as Director of Biotechnology Licensing at Bristol-Myers Squibb, and is known for writing meticulously researched thrillers in the tradition of Michael Crichton. The plot of his latest novel, THE CURE, is driven by startling new research showing the brains of psychopaths differ from those of non-psychopaths. Richards’s comprehensive study of psychopathy while writing THE CURE included consultations with a scientist who conducts brain scans on psychopathic murderers and rapists, and he has spoken extensively on the topic, most recently as a guest on Coast to Coast AM with George Noory.

“While few psychopaths are the Hannibal Lecter type, even non-criminal psychopaths leave a trail of shattered lives in their wakes,” explained Richards. “Psychopaths lie, manipulate, bully, and seduce to get what they want, caring nothing for those they trample in the process. They are predators, and we are prey, and they feel as much compassion and empathy for others as wolves feel for sheep.”

In addition to being absolutely selfish—without conscience, empathy, or remorse—psychopaths are cold-blooded, callous, and cool under pressure. But they can also be unbelievably charming and charismatic. They are smooth talkers who are never embarrassed or self-conscious, and make brilliant liars.

While it has been estimated that twenty percent of our prison populations, both male and female, are comprised of psychopaths, many are not criminal. They are the unscrupulous coworker who plays the boss like a fiddle, takes credit for your work, and stabs you in the back with a smile. They are the charmer who moves in with a girlfriend, sucks her dry financially and emotionally, and then spits her out and moves on without a care in the world. One study found psychopaths are three times more prevalent among business executives than in the general population.

While no studies have been done on our political class, Richards believes the prevalence of psychopaths among politicians is far higher than average, although he cautions that only an expert can diagnose this condition for sure, using a tool called the Hare Psychopathy Checklist-Revised. This diagnostic involves a standardized interview and examination of a subject’s history, looking for evidence that the subject is deceitful and manipulative, superficial, narcissistic, unselfconsciousness, unsympathetic, and so on.

“Psychopaths are deceitful, narcissistic backstabbers," said Richards. "They are brilliant and shameless liars and manipulators. When caught in a bald-faced lie, a psychopath doesn’t become embarrassed, just changes gears and spins an even bigger lie to cover it up. If you follow politics at all,” added Richards, “these behaviors are all too familiar.”

ABOUT RICHARDS AND THE CURE:

Douglas E. Richards has been widely praised for his ability to weave action, suspense, and science into riveting novels that brilliantly straddle the thriller and science fiction genres. With THE CURE, Richards has done it again, penning a scientifically accurate novel that, according to #1 New York Times bestselling author, Douglas Preston, "Will keep you turning the pages all night long."

In THE CURE, Erin Palmer has a devastating encounter with a psychopath as a young girl. Now a scientist, she may have found the cure for the psychopathic condition. But to use it she'll have to operate outside of the law and violate her most cherished ethical principles. Soon she is being hunted by unknown players with unknown motivations. And the stakes are nothing less than the future course of human history.

"Richards is a tremendous new talent," added Stephen Coonts, author of seventeen New York Times bestselling thrillers. "THE CURE is an extraordinarily good novel that will keep you riveted . . . and thinking."

THE CURE, a hardcover and eBook published by Macmillan (Forge), is available wherever books are sold. To request a review copy, for more information, or to schedule an interview with the author, please contact Karen Lovell at 646.307.5409 or karen.lovell(at)tor(dot)com.