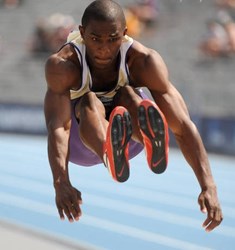 Dr. Releford is the medical director and founder of The Releford Foot and Ankle Institute and Beverly Hills PRP. He describes how he used PRP injections to treat the American long jumper: “After suffering a foot injury, the patient was treated with a series of two injections of platelet-rich plasma over a four-week period. The most notable early subjective revelation showed reduced discomfort and moderate to sizable increases in range of motion.” Frederick plans to resume his quest for gold at the 2016 Olympic Games in Rio de Janeiro, Brazil.

About Platelet-Rich Plasma Therapy
PRP therapy is an innovative, non-surgical approach that uses healing components derived from a small, concentrated amount of a patient’s own blood. Injected into damaged tissue, PRP therapy has the potential to “supercharge” the healing process. PRP has been successfully used in orthopedics and sports medicine to treat joint and tendon pain, ankle sprains, heel pain, non-healing wounds, plantar fasciitis, poor circulation, diabetic neuropathy, and many other conditions, as cited in the Journal of Orthopaedic Research (Jan. 2006). Recently, PRP therapy has made headlines due to its successful use by professional athletes like Tiger Woods, Kobe Bryant, Alex Rodriguez, and Rafael Nadal.