America's longest running lighted Christmas boat parade in beautiful Newport Beach, California brings not only holiday cheer, but visitors from all over the country to see one of the best holiday light displays in the world according to Visit Newport Beach Inc. 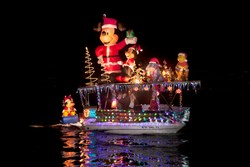 Escape the cold and celebrate the holiday season in Newport Beach, California for the 105th Annual Christmas Boat Parade, December 18th through the 22nd, 2013 hosted by the Newport Beach Chamber of Commerce.

The theme for this year’s five-night event is “Rockin’ Around the Christmas Tree.

"The Parade is our community's 'Christmas Card to the World' and sets the harbor ablaze with twinkling lights and holiday spirit like no other tradition in the country," says Newport Beach Chamber of Commerce President and Chief Executive Officer Steve Rosansky.

Participating watercraft range in size from 15 feet to more than 100 feet and are adorned with lights, decorations, moving displays, dancers and more.

More than 100 vessels are expected to light up beautiful Newport Harbor, which is also home to the “Ring of Lights,” the waterfront home decoration competition.

Named the “#2 Destination for Holiday Lights” by Yahoo Travel in 2011 and a “Top Ten Christmas Happenings in the nation” by The New York Times, the Newport Beach Christmas Boat Parade attracts about a million visitors each year.

“This is a great time of year for families and couples to take an early holiday vacation to Newport Beach and enjoy the Newport Beach Christmas Boat Parade, a spectacular American tradition,” says Newport Beach & Company Executive Vice President and Chief Marketing Officer Vicki Higgins. “Visitors from around the world fill our hotels and waterfront restaurants during this magical time.”

Co-founders Joseph Beek and John Scarpa started the tradition, which is the longest running lighted Christmas Boat Parade in America.

The parade begins at 6:30 p.m. in the Balboa Village area, and navigates the 14.7-mile route ending outside Bay Island at 9 p.m.

As is customary, the first and last night of the parade features a firework show from the Balboa Pier.

An opening night media reception will be held on December 18th with VIP viewing for journalists, interview availabilities, and the opportunity to capture the essence of the destination with unique travel angles.

For more information about the 105th annual Newport Beach Christmas Boat
Parade, how to order hotel packages, or restaurants with specials during the parade go to http://www.visitnewportbeach.com/events/newport-beach-christmas-boat-parade-2013-12-18/